A Brief, Sketchy, But Still Interesting History About The Library | Writer’s Relief 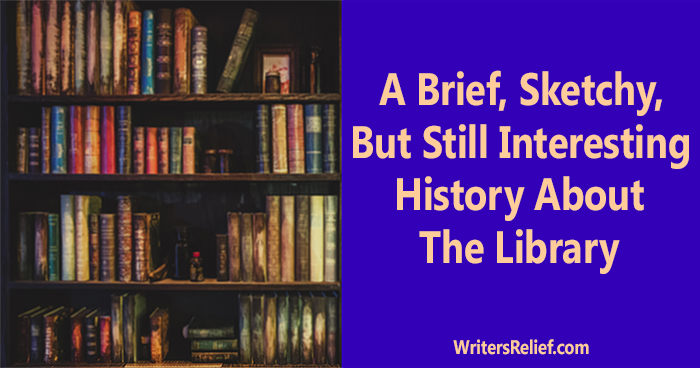 During National Library Week, some book geeks (like the ones here at Writer’s Relief) might wonder how libraries came into existence. From small to large and private to public, the library has a rich history that began a long time ago in a land far away and had little to do with actual books. This may seem a little sketchy—as in rough outline, not suspicious; we’re not sneaking off with your library card—but here’s a very interesting brief history about the library and how it came to be.

A Brief History Of The Library From A To Z

Research seems to indicate that libraries originated out of a need to preserve the sales and tax records as well as other administrative details of running a country. We don’t really know exact dates because, well, there were no libraries existing to store those dates. But an agreed-on time period puts the first library appearing about 5,000 years ago in the Fertile Crescent, an area that roughly covers the modern-day Middle East. This is the area that also brought us the invention of the wheel, planting cereal crops, and great strides in math, astronomy, and agriculture. It wasn’t called fertile for nothing!

The earliest known library was founded in Nineveh (now modern-day Iraq) sometime in the seventh century BCE. The library had 30,000 volumes, all clay tablets, which were engraved by scribes using a reed to impress characters into wet clay. And you thought hardcover books were cumbersome! (Hmmm…wonder what the return cart looked like…) Interestingly, clay tablets were stored much like modern-day books with the spine facing out.

Later, more libraries (and librarians) popped up across the developing world in Egypt, India, and much of Asia. The oldest known functioning library is in Morocco, which opened 1,157 years ago, in 859 AD. That’s also the year algebra was invented: Which proves that some inventions benefited humankind, while others were created simply to throw the alphabet into math problems and cause stress when taking exams.

For hundreds of years, libraries were private collections, restricted to scholars, priests, and friends of the wealthy patrons who funded the libraries. In fact, books were so scarce that they were once chained to the desks! (And some still are if you can believe that!) Throughout parts of China, libraries were exclusively developed and used by members of the royal families or approved scholars. Knowledge is power—and sometimes, so is a royal bloodline.

The invention of the printing press in the fifteenth century changed the library forever. Eventually, private libraries would become accessible to everyone as books became more available to the working class. Yet it still took several hundred years more for public libraries to appear. The first public, tax-supported library in America was opened in Peterborough, New Hampshire, in 1833. The earliest established library by and for African Americans—the Philadelphia Library Company of Colored Persons, was incorporated a few years later in 1836.

Question: Which is your favorite library?