by Blog Editor | Mar 4, 2020 | Inspiration And Encouragement For Writers | 0 comments 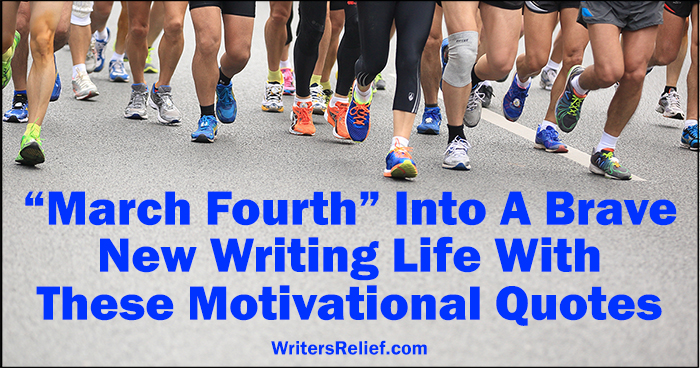 As any writer can tell you, the writing life is not easy. At Writer’s Relief, we know every writer has received a rejection letter at some point—even famous, successful authors. If you could use some motivation to get your writing and submission strategy back on track, it’s time to get creative! March forth on March Fourth and make today the first day of your brave new writing life. Celebrate this do something day with this curated list of our favorite empowering motivational quotes.

“If there’s a book that you want to read, but it hasn’t been written yet, then you must write it.”—Toni Morrison

“Read, read, read. Read everything— trash, classics, good and bad, and see how they do it. Just like a carpenter who works as an apprentice and studies the master. Read! You’ll absorb it. Then write. If it’s good, you’ll find out. If it’s not, throw it out of the window.”—William Faulkner

“Exercise the writing muscle every day, even if it is only a letter, notes, a title list, a character sketch, a journal entry. Writers are like dancers, like athletes. Without that exercise, the muscles seize up.”—Jane Yolen

“Your intuition knows what to write, so get out of the way.”—Ray Bradbury

“Imagination doesn’t just mean making things up. It means thinking things through, solving them, or hoping to do so, and being just distant enough to be able to laugh at things that are normally painful. Head teachers would call this escapism, but they would be entirely wrong. I would call fantasy the most serious, and the most useful, branch of writing there is. And this is why I don’t, and never would, write Real Books.”—Diana Wynne Jones

“I just give myself permission to suck. I delete about ninety percent of my first drafts … so it doesn’t really matter much if on a particular day I write beautiful and brilliant prose that will stick in the minds of my readers forever, because there’s a ninety percent chance I’m just gonna delete whatever I write anyway. I find this hugely liberating. I also like to remind myself of something my dad said in [response] to writers’[sic] block: ‘Coal miners don’t get coal miners’ block.’”—John Green

“And by the way, everything in life is writable about if you have the outgoing guts to do it, and the imagination to improvise. The worst enemy to creativity is self-doubt.”—Sylvia Plath

“It’s none of their business that you have to learn to write. Let them think you were born that way.”—Ernest Hemingway

“Start writing, no matter what. The water does not flow until the faucet is turned on.”—Louis L’Amour

“This is how you do it: you sit down at the keyboard and you put one word after another until it’s done. It’s that easy, and that hard.”—Neil Gaiman

“You can fix anything but a blank page.”—Nora Roberts

“I think that whenever a book is not a challenge, I’m telling the wrong story.”—Maggie Stiefvater

“There is no greater agony than bearing an untold story inside you.”—Maya Angelou

“A professional writer is an amateur who didn’t quit.”—Richard Bach

“I have been successful probably because I have always realized that I knew nothing about writing and have merely tried to tell an interesting story entertainingly.”—Edgar Rice Burroughs

“People on the outside think there’s something magical about writing, that you go up in the attic at midnight and cast the bones and come down in the morning with a story, but it isn’t like that. You sit in back of the typewriter and you work, and that’s all there is to it.”—Harlan Ellison

“Writing a novel is like driving a car at night. You can only see as far as your headlights, but you can make the whole trip that way.”—E. L. Doctorow

“The first draft is just you telling yourself the story.”—Terry Pratchett

“Don’t forget—no one else sees the world the way you do, so no one else can tell the stories you have to tell.”—Charles de Lint

“The only writer to whom you should compare yourself is the writer you were yesterday.”—David Schlosser

Tape these quotes to your computer monitor, pin them to the wall next to your writing desk, and write them in your notebook to help you keep motivated when you hit a slump. Use these quotes—and others like them—to remind yourself to March Fourth with your writing every day!

Question: What is your favorite inspirational quote?