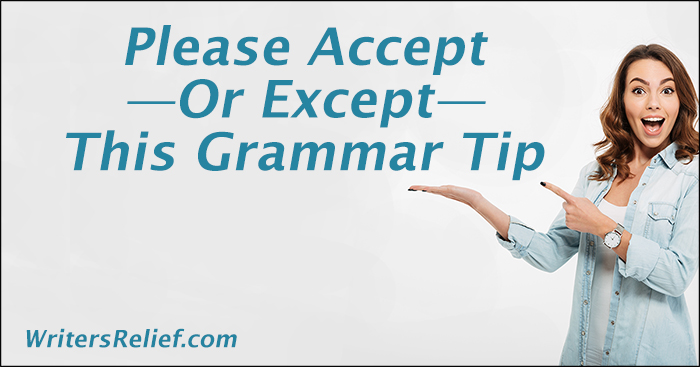 You’re happily writing when suddenly, the grammar police call. Do you accept or except the message? How do you know which word is correct, and which one will get your writer’s license revoked? Here’s a tip: The word geeks at Writer’s Relief are on the case! We’ve interviewed these tricky homophones to get their stories straight. Who exactly are accept and except, and what roles do they play in the English language? Let’s find out.

Accept Vs. Except: The Shocking Truth Revealed

WR: First, what the heck is a “homophone” anyway?

Grammar Police: Homophones are words that sound alike but have completely different meanings and are often spelled differently. When spoken, it might be difficult to detect which spelling and, therefore, which form of the word a person is using. However, writers face the risk of a summons from the grammar police if they confuse the two words on paper. (Yes, writing can be fraught with peril.) So, let’s be careful out there, people.

WR: Thanks, Grammar Police. Uh-oh, where are you going, accept and except?

Except: We’re in a bit of a hurry. It’s our date night. Opposites attract, you know.

WR: What do you mean?

Accept: He means that we basically have opposite meanings, so there is no need for writers to be confused. Accept means to receive. Except means to exclude. One is welcoming. The other is alienating.

Except: Hey, hold on a minute. Alienate? I’ll have you know that my heritage is Classical Latin. I come from the word excludere or “to shut.” I shut things out. Besides, I consider myself more of a blacklister. Sounds very Hollywood, 1950s, don’t you think?

Accept: Ignore him. I also have Latin heritage. I just don’t feel the need to tell everyone about it. I was once accipere, which means “to take in.” It’s better to receive than exclude, don’t you think?

WR: No need to argue! We’re not trying to drive a wedge in your relationship. You have both earned your places in the English language. We just want to help authors easily determine the difference between you to prevent mix-ups and mistaken identities when writing.

Except: Here’s the deal. I’m very versatile. Most commonly I am a preposition, but I can also be a conjunction. Sometimes I’m a verb. (My verb form is where most people confuse me with accept.) And if you add “ion,” I become a noun. Often, I can be interchanged with but or save. However, keep in mind that save sounds a little archaic, and but doesn’t always emphasize the strength of an exclusion. Take a look at these examples:

Except as a preposition: Jordan told everyone except Carol about the party.

Except as a conjunction: Jordan wants to invite Carol except she doesn’t know her phone number.

Except as a verb (a rare sighting indeed): She excepted her contact info from the employee list.

Except as a noun: There are no exceptions to the rule!

Accept: Well, I can also be a noun with the addition of “ance,” but mostly I am a verb. I may not be as versatile, but I assure you I am much more welcoming. Let me show you some examples:

Accept as a verb: I accept your apology for not inviting me.

Accept as another verb: We accept credit cards (which can be used to purchase expensive gifts as part of an apology).

Here’s accept as yet another verb: Joe’s short story was not accepted for publication. (Perhaps Joe could use some submission assistance from Writer’s Relief.)

Accept as a noun: There’s no guarantee of acceptance, but Writer’s Relief can boost your odds through targeted research that pinpoints the best markets.

WR: Well, this certainly clears up some things. What you’re saying is that accept is almost always a verb (unless it’s a noun), and except is most often a preposition (unless it’s a conjunction or, in rare cases, a verb or noun)—and that Writer’s Relief can really help writers with their submissions strategies.

Accept and Except: That sounds about right!

If you’d like more grammar and writing tips from Writer’s Relief, check these out:

When to use Less vs. Fewer

When to use Among or Between

Question: Which homophones do you find confusing?