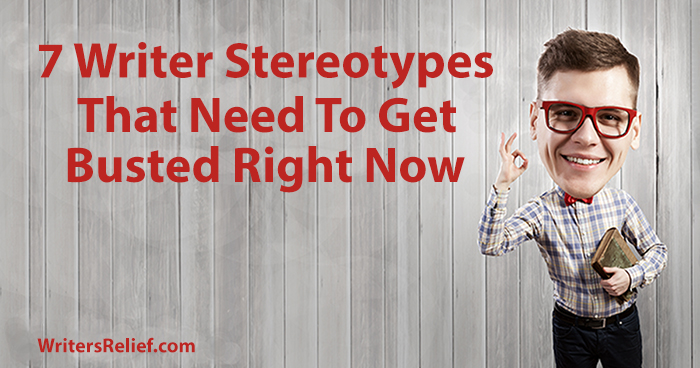 Writer stereotypes can be found in movies, television shows, and even books. So it’s no wonder that telling someone “I’m a writer” can lead to wince-worthy misunderstandings between writers and nonwriters. In many cases, these stereotypes deserve to be busted, tossed out, and replaced with real people living real lives. Writer’s Relief has gathered a list of the most common writer stereotypes—have you ever been typecast as one of these?

Plucky go-getter. This might be a poet, novelist, or even an aspiring journalist who doesn’t yet know the ropes. Always managing to say the wrong things and show up at the wrong time, this writer stereotype overcomes social awkwardness with an intrepid spirit and determination in the face of adversity. But this writer can also run into trouble when optimism leads him or her smack into the path of injustice. The go-getter works with tireless enthusiasm to write things that open people’s eyes—for better or worse. But don’t worry. It usually works out in the end!

Hermit. Living in a quaint, tiny house on the outskirts of town (or in a secluded area), this writer works the land, reads classic books, and takes long walks. The hermit uses writing to hold up a mirror to the world—while also stepping away from it. An unappreciated genius, this writer may never publish anything during his or her lifetime, but years later will have a collection of work that is revered by many.

Party animal. This writer stereotype paints a picture of larger-than-life creatives who play as hard as they write. Wild parties ignite volatile relationships for the party animal, but those stories of love and heartbreak fuel a creative inner life. Unpredictable, spontaneous, and deeply attached to the perks of fame and admiration, this writer moves people to laughter and tears on the page—but pays the price in real life.

Self-destructive addict. This is the writer who sits alone for weeks or years at a time, with a drink or drug of choice at his or her side, while indulging in long, lonely writing binges. Usually, this writer is portrayed as cantankerous and irritable, but also vulnerable and lost. This stereotype digs deep into the heart of humanity’s ugliest emotions and addictions. Must creatives suffer for the sake of their art? No, not at all. Toss this stereotype right in the trash.

Snooty know-it-all. Picture this writer wearing a smoking jacket, sitting in an overstuffed leather armchair, and sipping bergamot tea (and, as far as stereotypes go, he’s also more likely to be a man). Mister Know-It-All holds lots of degrees from impressive universities and has a subtle (or not-so-subtle) way of making people feel bad about themselves as he flaunts his academic knowledge. He’ll take on students to mentor—but only if they’re willing to gaze at him with flagrant adoration. As a writer, this guy’s goal in life is to write works that are so smart nobody can understand them.

Space cadet. Typecast as flakey, unpredictable, and discombobulated—this writer will be wearing two different socks, oversized glasses, and a pith helmet. Nothing professional or businesslike about this writer! He or she is a regular Nutty Professor. As a writer, the space cadet is always aspiring, always closing in on a goal—but never quite reaching it.

Accidental genius. This writer purports to be working on a novel or book that will change the world—and one day, it happens. This writer becomes rich and famous overnight, and the quirks and traits that make this author misunderstood are the same ones that make him or her stand out. Though Erin Morgenstern never claimed to be writing a book that would change the world, she did become famous overnight. Read her success story here.

The Truth About Writer Stereotypes

In real life, writers are usually complicated people whose cleverness and insightfulness mean that they can write stories, poems, and books that people want to read. As living, breathing people made of lots of moving parts, it’s rare that a real-life writer embodies the traits of just one writer stereotype fostered by both Hollywood and the literary world. Writers may be a bit distracted—but they also do the laundry, hold day jobs, enjoy ice cream, and look just like YOU.

Question: Have you ever been pigeonholed as one of these writer stereotypes? Which one?