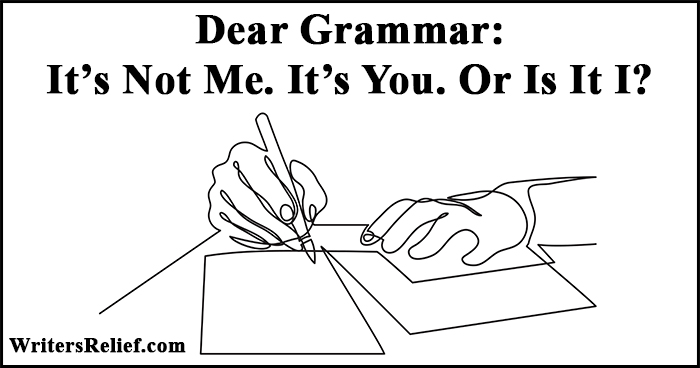 Just between you and us, the distinction between when to use me versus when to use I is sometimes a difficult one to grasp. It’s enough to make you want to break up with grammar and toss aside you, me, and I for a lost weekend with us. But fear not, writer! We here at Writer’s Relief are ready to save your relationship with proper grammar by telling you what’s what with both me and I.

How To Correctly Use Me Or I In A Sentence

You may have been taught that it’s generally a good idea to use I instead of me in most circumstances. And that’s a decent rule of thumb to follow. For instance, if you were trying to tell your couch-bound roommate about the group gym outing he missed, you would say:

Shannon, Jack, and I went to CrossFit today. We looked great in our matching headbands.

An easy way to tell that this is the correct usage of I is to take out the other subjects of the sentence: in this case, Shannon and Jack. If it had been you alone breaking a sweat in the multipurpose room, you would say:

I went to CrossFit today. It was very lonely.

Saying “Me went to CrossFit today” is incorrect. Instead of making you sound like a well-read English speaker, it makes you sound like Cookie Monster with post-carb guilt. In this case, the rule of replacing me with I rings true.

However, contrary to popular belief, it’s not always correct to toss out the me and replace it with I. Sometimes the use of me is actually correct, even though your friends may try to call you out on it. Let’s say that you wake up the next morning for another bout of CrossFit (remember, this is all hypothetical—we’re sore just thinking about all that cardio), and you decide you want to invite your roommate, who is doing his best to sleep in. You enter his room, throw open the curtains, and say:

CrossFit time! Would you like to come with Shannon, Jack, and me?

Now, even if he throws his pillow at you for having the gall to wake him up at the ungodly hour of noon, you can take pride in the fact that you asked using proper grammar. In this instance, saying “Would you like to come with Shannon, Jack, and I?” would be incorrect.

Let’s employ the same rule we used earlier: If we removed the other objects in the sentence, we would be left with “Would you like to come with I?” This makes you sound like an off-brand version of Yoda, which could be great if you are surrounded by Stormtroopers in a bakery called Obi-Wan Cannolis. Hey, personally, we love ricotta cheese, but not enough to use incorrect grammar. Besides, those Stormtroopers can’t hit the side of a barn.

Don’t worry. We’re not staring at you over the tops of our horn-rimmed eyeglasses, slowly shaking our heads. Many people struggle with this distinction. The reason might have to do with a sort of spillover effect; they know that it is incorrect to say a sentence like the following:

Shannon, Jack, and me are addicted to CrossFit; we may need to seek professional help.

Professional help, indeed! In order to avoid sounding as if they played hooky and missed English 101, some people will substitute every instance of “and me” with “and I.” While the intention is noble, in order to get it right every time, you really have to understand the rules at play when dealing with I and me.

We’ve covered the basic rule for when to use these two tiny pronouns, but we’re not done yet. In fact, we’re just getting started!

The short answer is simple: Never use “between you and I.” It’s incorrect grammar! (Look out! Here comes Mrs. Thompson with her ruler.)

Just between you and me, I think the CrossFit class has gone downhill since Carol took over. I’m just not sure if her heart is in it anymore.

Now, why is this the case, you might ask? Well, Carol is more of a tai chi person. Oh wait, you mean about the pronouns. The answer lies in the function of the word between. That’s right—it’s a preposition! When used in sentences, prepositions should always be followed by an objective pronoun: words like me, him, her, and us that act as objects of prepositions or verbs.

Saying “between you and I” may sound correct to some people, but it’s not. I (along with words like you, we, he, she, it, and they) is a subjective pronoun. It acts as the subject of a verb.

Subjective pronouns should never come after prepositions. Throwing one in would be the grammatical equivalent of saying “between we,” which is unequivocally incorrect!

So there you have it—everything you ever wanted to know about using I and me. In short, the rule plays out like this: Use I when you are the one performing the action, and use me when you are the one receiving the action. Once you know this, it’s a pretty easy set of rules to remember (just between you and me). Hopefully, you learned a little something about grammar, along with the somewhat addictive powers of CrossFit and cannoli.—which probably shouldn’t be in the same article together.

Want more grammatical tips and tricks? Check out some of our other articles that can help keep you and proper grammar on speaking terms. (And we’re really sorry we keep bringing up cannoli, but we skipped lunch today.)

When to Use Less vs. Fewer

Keeping Up With the Dashes

When to Use Affect and Effect

Question: What other grammar gaffe is your pet peeve?