It’s Versus Its: How To Get It Right When Writing | Writer’s Relief 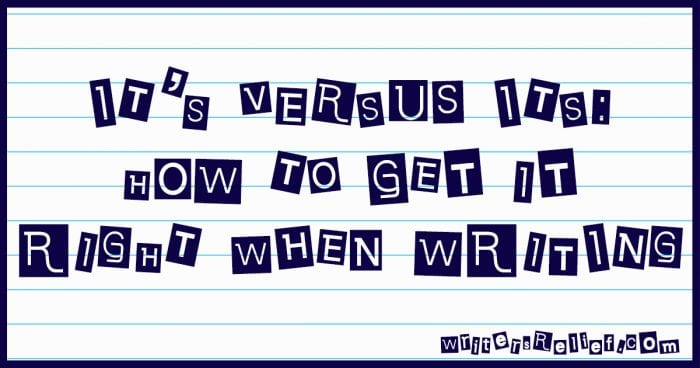 Today at Writer’s Relief we’re going to reveal the hard facts about the pronoun Its and the contraction It’s. These two troublemakers are identical in sound and, except for that jaunty, devil-may-care apostrophe, very similar in appearance. But beware, writers: It’s and Its have a reputation for pretending to be the same word—they delight in being a source of embarrassment in social media posts and have earned the distinction of being one of the top pet peeves of literary editors and publishers.

Don’t become an unsuspecting victim of the subtle switcheroos pulled by It’s or Its! When it comes to It’s versus Its, our fact-finding mission exposes how to get “IT” right when writing. We’ve invited the infamous duo to our interrogation room to clear up some misconceptions.

It’s Or Its: Grammar Tips Ripped From The Headlines Of Short Stories, Poems, And Essays

WR: Thank you both for joining us. Each of you, please state your name and relevant background information.

IT’S: I’m It’s, and I’m a contraction, which is a set of words shortened into one with the use of an apostrophe. There are many of us contractions working in the world of grammar. Consider me the compact version of it has or it is.

ITS: And I’m Its, a personal pronoun. There’s a bunch of us as well. Only we don’t need fancy accessories like the apostrophe to make us work.

WR: Okay. Well, we’ve heard the rumors. Isn’t one of you possessed? Which one is it?

WR: But you have the apostrophe, and in the English language, this signifies possession. True or False?

IT’S: True. Most words indicating possession have an apostrophe S (’s) at the end. Not the Linda Blair kind of possession. The ownership kind. However, for some personal reason, Its is already in its possessive form. Very strange if you ask me.

WR: So, Its is the possessive one?

IT’S: Clearly. Can’t you see the way he makes everything his? Look at this:

Cathy wanted to wear her favorite accessory to the rodeo, but the belt had lost its giant, two-pound silver horseshoe belt buckle.

Mackenzie’s horse stuck its hoof in the dog’s water bowl and created a mess in the kitchen.

ITS: [glares at IT’S] Now wait a minute! I simply show ownership of the noun preceding me. Let me give you some examples.

Even though Wendy insisted on neon pink paint for the window frames, the house still held its timeless character. (The house’s character)

The rain took its toll on Reba’s ornate bouffant hairstyle. (The rain’s toll)

When Joey’s parasailing adventure went awry, the giant oak tree lost one of its branches. (The tree’s branches)

WR: Ah! Got it. The last thing we want to do here at Writer’s Relief is confuse the two of you. We have a reputation to uphold! So, how can writers make sure they use the right one of you when writing?

IT’S: Well, in order to use It’s, you must mean to say either it has or it is. If not, you have to go with Its. Here, let me show you what I mean:

Its/It’s true that Jill loves cats almost as much as she loves fluffy socks.

Because you can also say “It is true that Jill loves cats almost as much as she loves fluffy socks,” the correct choice is It’s.

Sabina sang loudly out on her porch, “Every rose has its/it’s thorn!”

Guns N’ Roses is my guilty pleasure. [waves lighter] Since you can’t say “Every rose has it is thorn,” the correct choice is its. No apostrophe.

How’d you do? Just follow the simple it is/it has rule and you’ll never be led astray! But here’s a warning from both of us: If you see ITS’ running around in your creative writing or latest text—or anywhere—have her removed immediately by the grammar ghostbusters.

WR: And why is that?

ITS and IT’S: Because she doesn’t exist. No such word!

WR: Okay! Thank you both for being here today. Its/It’s been enlightening!

For more clarification on confusing words in the English language, check out these articles from the Writer’s Relief blog.

Grammar Tip: When To Use Less Vs. Fewer

Grammar Tip: When To Use Among Or Between

En Or Em Or Maybe Hyphen: Keeping Up With The Dashes

Question: Is the It’s versus Its confusion your top grammar pet peeve, or do you have another?