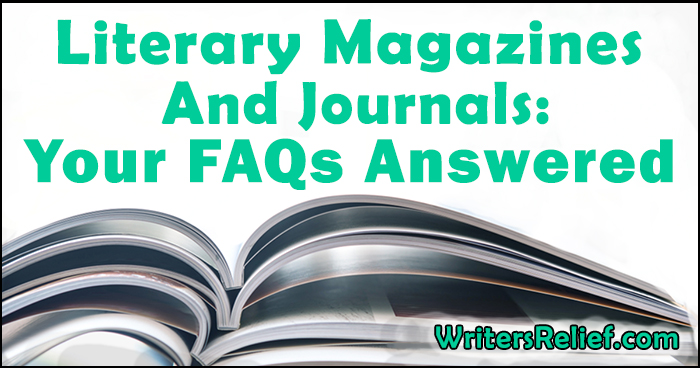 If you’re writing poetry, short stories, creative nonfiction, or essays, then literary magazines are your best friends. But at first glance, the world of literary journals can be intimidating. The submission guidelines often vary from one publication to another, and each journal seems to have its own special etiquette that you must try to decipher. And then there are the oodles of rejection letters that writers receive over the course of their careers. The entire process can be quite overwhelming. You probably have a lot of questions.

Fortunately, the submission strategy experts here at Writer’s Relief have a lot of answers. We know the ins and outs of getting poems, short stories, and personal essays published in literary magazines. And guess what? It may not be as difficult to get published as you think!

FAQs About Literary Journals And Magazines

Q.: What Is The Definition A Literary Magazine (AKA Literary Journal)?

A.: A literary magazine is a publication of collected works by various authors. Writers can submit their writing to editors of literary journals at different times during the year depending on reading dates. Submissions can be unsolicited (not requested) or solicited. Literary magazines feature poems, short stories, and essays that are written by new, unpublished writers, or by well-known authors. Each literary magazine has its own style and focus.

The number of people who staff a literary magazine can run from a single editor working alone from home, right up to a large team of volunteer readers and paid staffers who unite to put out multiple issues of a magazine every year.

Writer’s Relief maintains a HUGE database of literary magazines. The database is updated daily, based on not only the information that is available to the public, but also on insider information gleaned from managing our clients’ submissions to various editors. Tracking many years’ worth of personal comments on submissions means that we know what editors like, and we make it our goal to connect writers with the editors who will fall in love with their work.

Q.: How Much Do Literary Magazines And Journals Pay Creative Writers?

Unfortunately, it’s unlikely that a writer will be able to make any significant income by publishing in literary journals. Literary magazines are rarely able to pay creative writers for the privilege of publishing an accepted poem, story, or essay. And the literary journals that do pay writers are rarely able to pay much beyond a token honorarium.

That said, there are some literary magazines that do pay writers for the right to publish poems, short stories, essays, and the like. Here are a few places to start your research to find literary journals that pay:

How To Find Literary Journals That Pay Writers

Q.: What Are The Benefits And Advantages Of Getting Published In Literary Magazines?

A.: Most writers submit their poems, stories, and essays to literary journals in order to gain exposure for their writing. Getting published in a literary magazine is one of the best ways to build a strong reputation as a creative writer. Literary agents and publishers often read literary journals to discover exciting new voices. In the publishing industry and in academia, publishing in literary journals is a rite of passage that is, in some circles, an expected first step in a writer’s career.

Need more convincing? Read this: 33 Great Reasons Why You Should Submit Your Writing To Literary Magazines | Writer’s Relief.

Q.: What Is The Difference Between A Literary Journal And A Literary Magazine?

Q.: What Genres Are Published In Literary Journals?

A.: The majority of literary journals publish a mix of short stories, personal essays (nonfiction), and poetry. They might also include some visual artwork, interviews with authors, and book reviews.

Though many literary magazines accept a wide array of genres, some specialize in one genre. For example: One literary journal might exclusively publish flash fiction, while another might be dedicated to publishing “long” short stories.

Literary magazines can also be organized by theme (love, nature, food, etc.) or by authorial interests/ethnicity/place of residence.

Q.: What Style Of Writing Is Most Common In Literary Magazines?

A.: These days, many editors of literary journals are interested in publishing creative writing that has a literary sensibility. That means, the majority of literary magazines are interested in writing that’s a little challenging, thoughtful, experimental, intelligent, and emotional—writing that might not find a home at a commercial publishing house. However, you will also find literary magazines that specialize in genres that are historically considered commercial: detective stories, romances, etc.

Learn more about the difference between literary and commercial writing.

Q.: What Does A Literary Magazine Editor Actually Do For Writers?

A.: Editors at literary journals read through submissions, facilitate conversations about manuscripts and publishing, make decisions about which works to accept, write up editorial requests and assist authors with revisions, proofread and format, and much more.

Q.: Which Is Better For A Writer’s Career: Publishing In Digital Literary Journals Or Printed Literary Magazines?

A.: When literary magazines began moving into digital format, some writers resisted the change—in part because of the nostalgic draw of holding a physical copy of a printed publication. But now, online literary publications are as reputable, profitable, and career-building as print literary journals—if not more.

Focusing your publishing efforts on building your reputation, as opposed to pursuing a specific publishing medium, is a stronger, smarter approach to establishing a successful writing career.

Q.: How Can You Determine The Reputation Of A Literary Journal?

A.: To evaluate the reputation of a literary magazine, there are a few criteria you can consider:

Here at Writer’s Relief, we recommend that writers submit their work to a range of literary magazines, which means focusing not only on top-tier, famous literary publications, but also on reputable mid-size and even small periodicals. There are many advantages of this approach: So-called small publications can have a big effect on a writer’s career by way of exposure, award nominations, networking opportunities, and more.

A.: Very few editors of literary magazines would turn away talented new writers just because they’d never been published. That said, some literary journals do tend to give priority to established writers. However, there are many others who welcome writing submissions from unpublished writers. In fact, many editors consider it a badge of honor to discover the next great writer in their pile of unsolicited submissions.

Here’s where you can learn more about how new writers can get published in literary journals.

Q.: What Formatting Rules Should Writers Know For Submitting To Literary Magazines?

A.: If the submissions guidelines page of a literary journal’s website doesn’t specify a format for submitted work, writers would do well to follow customary publishing industry protocol. Contact information in the upper left corner, standard fonts and margins, and headers that include name and page number will rarely rub editors the wrong way.

Most editors at literary magazines also like to read a cover letter or at least an author bio from writers who are hoping to secure publication.

Q.: What Are The Most Common Mistakes That Creative Writers Make When Submitting To Literary Magazines?

A.: If you’re a new writer trying to get published in a literary journal, here are the common mistakes that you’ll want to avoid!

Skipping the cover letter. If a literary magazine editor indicates that he or she wants to read a cover letter, seize the opportunity to make a personal connection.

Ditching the author bio. Some writers neglect to include an author bio in order to make a statement that only the written manuscript should matter in the editor’s decision to publish or not to publish. Other writers skip the author bio simply because they have a lack of publishing credits. Whatever your opinion, know this: If a literary magazine editor asks you for a bio, then you skip it at your own risk.

Clicking “send” too quickly. Never hit the “send” button until you’re sure your submission is thoroughly proofread. You may even want to consider working with a professional proofreader when submitting your creative writing to literary magazines and journals.

Narrowing the market. Many writers get hung up on the notion that big-name literary magazines are the only worthwhile publications. Unfortunately, this mind-set often leads to limited publishing opportunities, especially for new writers.

Submitting without researching first. Some writers send their creative writing to any and every literary magazine under the sun. This is not a policy we endorse. If you get a reputation for submission spam, you could find yourself blacklisted.

And the number one, most common mistake writers make when submitting to literary magazines…

If you can’t find a home for a truly good piece of writing, chances are you’ve given up too quickly. There are thousands of literary magazines out there. It can take time to find the right one. But with time constraints, research frustrations, query/cover letter etiquette questions, and countless insecurities, it’s a wonder some writers get any submissions out the door at all!

Q.: Are There Any Companies That Help Writers Get Their Writing Published In Literary Magazines And Journals?

A.: Yes! Writer’s Relief has been helping creative writers get published in literary journals since 1994. Our clients have had their poems, stories, and essays published in thousands of reputable literary magazines. We help new writers nab their first coveted publications and established writers to spend more time writing and less time wading through the busywork and research of making submissions.

Check out some of the countless reviews and testimonials for Writer’s Relief. Then, reach out to us to learn how we can help you get published in literary magazines and literary journals.

Question: Did we answer your questions about literary journals? If not, post your question in the comment section!