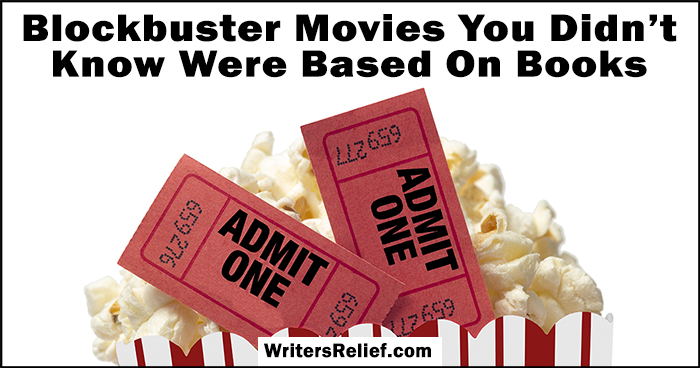 Summer means sandy feet, sunburnt shoulders—and new movie releases! Sitting in a nice cool theater watching the latest blockbuster is a great way to beat the heat. Here at Writer’s Relief, we all love the written word, so our favorite movies are based on books. Here’s a list of blockbuster movies that we bet you didn’t know were adapted from books!

Popular Movies Based On Books

As an ethereal dome known as “The Shimmer” expands over an increasingly large area of the northeastern US, five women are tasked with infiltrating its borders and finding out what’s going on inside.

COOL FACT: Writer and director Alex Garland acquired the rights to the first novel in Jeff VanderMeer’s Southern Reach Trilogy before the second two books even came out. He decided he wanted to finish the story on his own, without the help of VanderMeer’s forthcoming novels, so the later parts of the movie are entirely separate from what actually happens in the series. An even more interesting point is how many similarities the two share with one another.

The Silence of the Lambs (1991): Starring Jodie Foster and Sir Anthony Hopkins

COOL FACT: The movie is based on the novel of the same name by Thomas Harris. The Silence of the Lambs was actually the second book to feature Dr. Lecter. The first, The Red Dragon, describes his capture against the backdrop of a similar manhunt for a serial killer known as “The Tooth Fairy.”

Slightly slow but filled with childlike innocence and heart, Alabama native Forrest Gump makes his way through many notable historic events of the mid-20th century, making friends and chasing after his longtime sweetheart, Jenny Curran.

COOL FACT: Though the movie shares its title with its prosaic counterpart, Forrest Gump by Winston Groom, the two differ greatly. In the novel, Forrest spends time with NASA, a tribe of cannibals, and an orangutan named Sue—none of which made it to the screen!

Everyman George Bailey desperately wants to spread his wings and get out of his hometown of Bedford Falls, NY, but circumstances have held him in place for years. As his misfortune comes to a head one Christmas Eve, he is given the chance to see what life would be like without him.

COOL FACT: Sure, it’s often regarded as a Christmas movie, but director Frank Capra never intended it as such. The movie was actually based on a short story called “The Greatest Gift,” written by Philip Van Doren Stern and published privately three years before. Now, it’s regarded as one of the most important movies in American cinema, and is broadcast nationally every year during the Christmas season!

Wrongly convicted for murdering his wife and her lover, former banker Andy Dufresne is sentenced to life in prison at the Shawshank State Penitentiary, where he puts his financial skills to work helping to launder dirty money brought in by the warden.

COOL FACT: Written as a novella titled Rita Hayworth and Shawshank Redemption by Stephen King, it was originally included in a short story collection known as Different Seasons, which also contained a story called “The Body”—the basis for another blockbuster movie, Stand by Me!

A hideous ogre goes on a quest to rescue a princess in an effort to get his property back from a tyrannical ruler.

COOL FACT: Known far and wide as an animated classic, DreamWorks Animation Studio’s first film was based on a children’s book, Shrek by William Steig. Steig is also well-known for his picture book Sylvester and the Magic Pebble, about a donkey that accidentally turns himself into a boulder.

After a great white shark devours Amity Island native Chrissie Watkins, three men take it upon themselves to hunt it down and kill it.

COOL FACT: Often regarded as the “father of the summer blockbuster film,” Jaws set the precedent for huge-budget movies released in warmer months. Based on the novel of the same name by Peter Benchley, Jaws is well-known for the menacing, ominous aura that surrounds its titular man-eating shark—aided by John Williams’s iconic score. But did you know that Bruce the shark initially had significantly more screen time? Director Steven Spielberg made the decision to cut back on the appearances of the animatronic shark used in filming because it malfunctioned so often.

Here are a couple of upcoming page-to-screen adaptations we’re looking forward to watching! Grab some popcorn and take a seat!

When an anxiety-ridden, agoraphobic architect leaves her house without a word for the first time in years, it’s up to her family to uncover the mystery of where she’s gone and how they can bring her back.

The book, Where’d You Go, Bernadette, was written by Maria Semple.

After his mother dies in a terrorist attack on an art museum in New York City, Theo Decker falls into a web of crime and deceit that lies at the heart of the art world. A painting called The Goldfinch that he stole from the museum is his only source of hope.

The book The Goldfinch was written by the elusive author Donna Tartt, who also wrote The Secret History.

If you enjoy the movies on this list, be sure to read the books they are based on! Movies can’t capture every element of the books they draw from—so by reading the books, you’ll discover characters and plot arcs you didn’t even know about!

Question: What is your favorite book-to-movie adaptation?