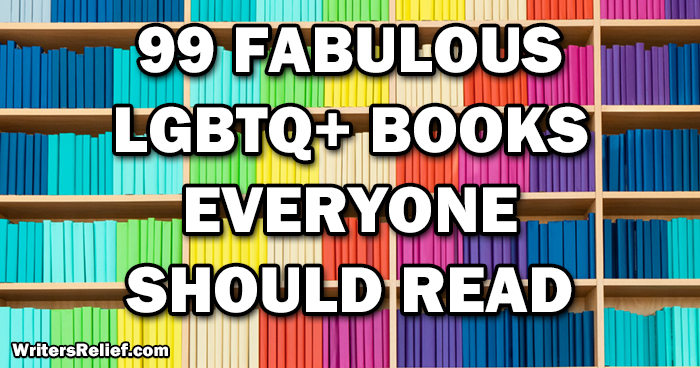 Noticed an abundance of rainbows everywhere? June is LGBTQ+ Pride Month! Reading is one of our favorite things to do here at Writer’s Relief (when we’re not busy helping our clients get more acceptances!), so we’ve put together an extensive list of LGBTQ+ books you should definitely read.

The 99 Best LGBTQ+ Books To Read

The Danish Girl by David Ebershoff

Call Me by Your Name by André Aciman

Tipping the Velvet by Sarah Waters

The Hours by Michael Cunningham

The Price of Salt (now Carol) by Patricia Highsmith

Simon vs. the Homo Sapiens Agenda by Becky Albertalli

One True Way by Shannon Hitchcock

Her Body and Other Parties by Carmen Maria Machado

The Pursuit of Miss Heartbreak Hotel by Moe Bonneau

The Well of Loneliness by Radclyffe Hall

Tales of the City by Armistead Maupin

A Little Life by Hanya Yanagihara

The Line of Beauty by Alan Hollinghurst

The City and the Pillar by Gore Vidal

Annie on My Mind by Nancy Garden

City of Night by John Rechy

The Miseducation of Cameron Post by Emily M. Danforth

The Color Purple by Alice Walker

Under the Udala Trees by Chinelo Okparanta

Tomorrow Will Be Different: Love, Loss, and the Fight for Trans Equality by Sarah McBride

The Rules Do Not Apply by Ariel Levy

The Argonauts by Meggie Nelson

Would You Rather? A Memoir of Growing Up and Coming Out by Katie Heaney

Out East: Memoir of a Montauk Summer by John Glynn

Amateur: A True Story About What Makes a Man by Thomas Page McBee

Teaching the Cat to Sit: A Memoir by Michelle Theall

Fire Shut Up in My Bones by Charles M. Blow

Stuck in the Middle With You: A Memoir of Parenting in Three Genders by Jennifer Finney Boylan

The Gilded Razor by Sam Lansky

When We Rise: My Life in the Movement by Cleve Jones

Being Jazz: My Life as a (Transgender) Teen by Jazz Jennings

She’s Not There: A Life in Two Genders by Jennifer Finney Boylan

Stung With Love: Poems and Fragments of Sappho

Drive Here and Devastate Me by Megan Falley

Not Here by Hieu Minh Nguyen

bury it by Sam Sax

You’re the Most Beautiful Thing That Happened by Arisa White

When My Brother Was an Aztec by Natalie Diaz

Hidden From History: Reclaiming the Gay & Lesbian Past by Martin Duberman, Martha Vicinus, and George Chauncey

Love Wins: The Lovers and Lawyers Who Fought the Landmark Case for Marriage Equality by Debbie Cenziper and Jim Obergefell

Odd Girls and Twilight Lovers: A History of Lesbian Life in Twentieth-Century America by Lillian Faderman

Queer There and Everywhere: 23 People Who Changed the World by Sarah Prager

Stand By Me: The Forgotten History of Gay Liberation by Jim Downs

The Celluloid Closet: Homosexuality in the Movies by Vito Russo

The Right Side of History: 100 Years of LGBTQ Activism by Adrian Brooks

The Lavender Scare: The Cold War Persecution of Gays and Lesbians in the Federal Government by David K. Johnson

The Life and Death of Latisha King: A Critical Phenomenology of Transphobia by Gayle Salamon

A Queer History of the United States by Michael Bronski

Out for Good: The Struggle to Build a Gay Rights Movement in America by Dudley Clendinen

Unspeakable: The Rise of the Gay and Lesbian Press in America by Rodger Streitmatter

Gay Voices of the Harlem Renaissance by A.B. Christa Schwarz

Strangers: Homosexual Love in the Nineteenth Century by Graham Robb

The Gay Metropolis: The Landmark History of Gay Life in America by Charles Kaiser

Sapphistries: A Global History of Love Between Women by Leila J. Rupp

A History of Bisexuality by Steven Angelides

Question: How many of these LGBTQ books have you read?