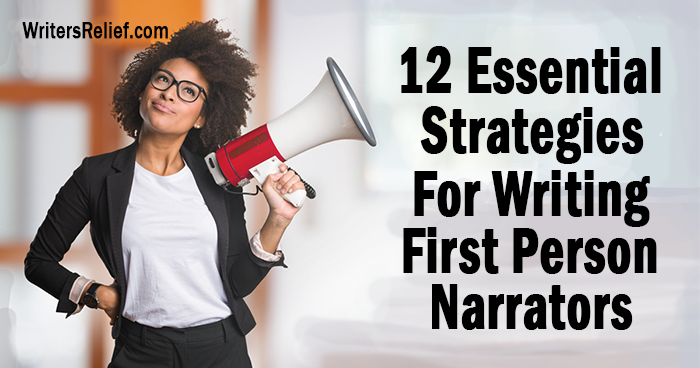 Since you talk about yourself in first person—I went to the grocery store…I captured the dragon—it stands to reason that writing in the first person would be second nature, right?

Not so, friends, not so.

Writer’s Relief understands the perils of the first-person point of view (POV). It is often one of the most difficult narrative perspectives to master, and even some of the most gifted writers struggle to pull it off.

But don’t worry! We know the essential strategies that will help you write a credible first-person narrator who also happens to be a great storyteller too.

WRITER PROBLEM #456: When you start talking to people in real life as if you’re the narrator in the book you’re writing.

Determine your narrator’s temporal perspective. Is your narrator looking back on a moment long ago with all the wisdom and perspective that comes with age and hindsight? Or is he/she living in the present (tense) moment—with no idea how the story ends and plenty of room for personal growth? Your choice informs the way your narrator tells the story.

Decide on your narrator’s relationship to the reader. Sometimes, first-person narrators are storytellers who knowingly relate the things that happened to them. These self-aware narrators may or may not be reliable as they fashion the story to their liking. But in other circumstances, a first-person narrator tells a story almost as if the audience is a distant afterthought—and the act of telling the truth is central. Your narrator’s relationship to the reader will influence the story as it unfolds.

Write with the five senses. First-person writers might feel a tendency to focus on the narrator’s internal complexities, but sensory perception—life experienced through the five senses—will make the story come alive. First-person narratives feel more firmly embodied when the action is grounded in sight, smell, hearing, taste, and touch.

Create a narrator worth listening to. Many of the great first-person narratives are larger-than-life characters who make bold moves to reach their goals. But passive first-person narrators can also attain goals. They just do it in quieter—but equally effective—ways.

Match your narrator’s voice to his/her backstory. Your character’s diction, dialect, and inflections should reflect his or her background. But…

Don’t lay accents on too thick. When it comes to regional accents, less is more. Hint at dialect through well-placed word choices—rather than trying to phonetically replicate speech.

Skip passive voice. Some writers tend to lapse into passive voice (or passive statements in general) when writing in first person. For example: The sound of footsteps filled the room and the floor was darkened by the appearance of a long shadow. An improvement might be: I heard footsteps—and not a moment later, a dark shadow crossed my path.

Avoid too many I’s. Too often, first-person narrators start every sentence with “I.” Too much “I” perspective can actually be detrimental to a story; when the narrator stands like a filter between the reader and the action, dramatic tension pays the cost. Sometimes the narrator needs to step out of the way and allow a scene to speak for itself.

Delete self-referential phrases. I felt, I thought, I heard, I saw…These phrases become redundant for first-person narrators. Plus, this sentence construction creates narrative distance between the reader and the narrator, breaking the emotional bond that leads to an immersive reading experience.

Know your genre’s first-person tropes. Some book genres are favorites for first-person narration (like some erotica, new adult, or classic detective noir). If your choice to write in first person echoes genre traditions, be sure you’ve mastered those concepts—even if you decide to ignore them in the end.

Why Are You Writing In First Person?

Although your default setting may be to tell your story in first person, that POV might not actually be the best choice. Experiment with different perspectives—what you learn will help you decide if a first-person narration really is the best POV for your story.

Question: First person: Love it or hate it?