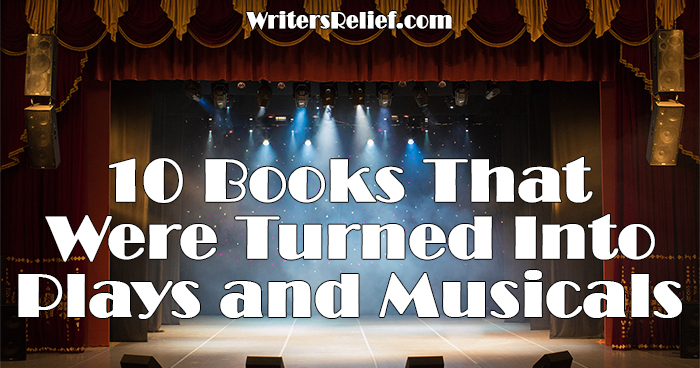 If you’re a writer, you’re probably also a bit of a bookworm. So curling up on the couch with a great book is a real treat. But if you’re also a theater geek, an even bigger treat would be to see a play based on a favorite book!

Find your seat in the mezzanine and turn off your cell phone. Writer’s Relief has a list of the best books that were turned into plays or musicals. The curtain’s going up…

Christopher Hampton’s stage adaptation of this novel about decadence and desire was a smash hit when it opened in London’s West End in 1985 and on Broadway in 1987. The devious leads have been played throughout the years by such actors as Alan Rickman, Lindsay Duncan, Laura Linney, and Liev Schreiber. And a popular 1988 film adaptation starred Glenn Close and John Malkovich.

The Bridges of Madison County by Robert James Waller

This enduring romance between an Italian war bride living in the remote cornfields of Iowa and a National Geographic photographer was adapted into a Tony Award-winning musical by Jason Robert Brown and Marsha Norman. Despite having had only a brief run on Broadway in 2014, it frequently receives productions around the country.

A Time to Kill by John Grisham

John Grisham’s riveting tale of retribution and justice was adapted for the Broadway stage by Rupert Holmes and enjoyed a brief run on Broadway in 2013.

To Kill a Mockingbird by Harper Lee

Harper Lee’s classic novel about race and justice in the Depression-era South was initially adapted for the stage by Christopher Sergel. A new version by Aaron Sorkin opened on Broadway in 2018, stirring controversy when the producer began shutting down community theatre productions around the country that had planned to use the Sergel script.

This Victorian classic about an orphaned girl who becomes a governess has been adapted numerous times for stage and film. A Broadway musical version had a brief run on Broadway in 2001. A more recent adaptation by director Sally Cookson played London’s National Theatre and toured the UK in 2017.

The Yearling by Marjorie Kennan Rawlings

This Pulitzer Prize-winning novel about a family struggling to get by in 1870 Florida was adapted into a musical by Herbert Martin and Michael Leonard. By the time it opened on Broadway in December of 1965, it had already announced its closing date, playing only three performances. While the score has received compliments from artists such as Barbra Streisand, many felt the material was inappropriate for a musical adaptation.

Gone with the Wind by Margaret Mitchell

This epic tale of the Old South has been adapted for the stage a few times. A 1966 nine-hour, non-musical adaptation opened in Japan, and was heavily revised and trimmed down to create a musical version entitled Scarlett. That version opened in London’s West End in 1972. Retitled Gone with the Wind, it played out-of-town tryouts in Los Angeles and San Francisco, but never made it to Broadway. In 2008, a new musical adaptation by Margaret Martin appeared in the West End. That production never made it to Broadway either.

Wicked: The Life and Times of the Wicked Witch of the West by Gregory Maguire

Gregory Maguire’s political and philosophical allegory about the coming-of-age of Elphaba, who would eventually become the eponymous Wicked Witch of the West, was adapted into a family-friendly Broadway spectacular by Stephen Schwartz and Winnie Holzman. Opening in 2003, it is still going strong on Broadway, on tour, and internationally.

His Dark Materials by Philip Pullman

Philip Pullman’s fantasy novel trilogy was adapted for the stage by Nicholas Wright. It opened at London’s National Theatre in 2003 in a two-part production directed by Nicholas Hytner, and enjoyed a second production in 2004.

The Woman in White by Wilkie Collins

Wilkie Collins’ 1859 mystery was a massive hit when it was serialized in All the Year Round. It was adapted as a stage melodrama in 1860 and 1871. In 2004, Andrew Lloyd Webber, whose adaptation of Gaston Leroux’s Le Fantôme de l’opéra (The Phantom of the Opera) became the longest running musical on Broadway, wrote the score for a musical adaptation that played London’s West End and on Broadway.

Question: What’s your favorite book that has been adapted to the stage?