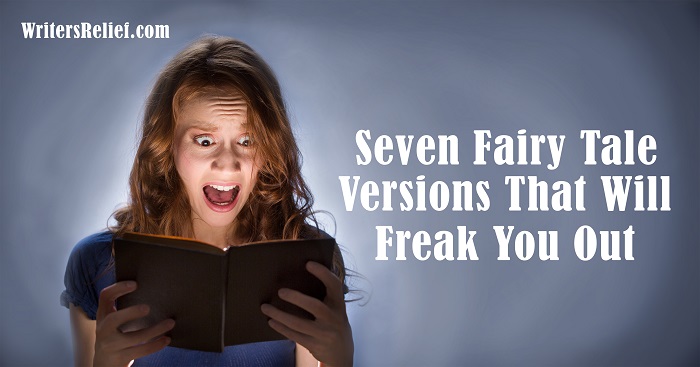 Once upon a time, February 26 became National Tell a Fairy Tale Day! And while we all enjoy these timeless classics with their “happily ever after” endings, the early versions of many fairy tales—before Disney created the popular, family-friendly adaptations—are often quite dark, creepy, and even graphic enough to freak out unsuspecting readers.

Writer’s Relief has done some in-depth research (after all, it’s what we do!) and found the original versions of seven well-known fairy tales. Be warned: These aren’t your grandma’s warm-and-fuzzy fairy tales—the Brothers Grimm lived up to their name! We wouldn’t recommend reading these to any impressionable young children right before bedtime!

The Terror Behind Familiar Fairy Tales

In the Disney film version, the mean stepsisters try and try to squeeze their feet into Cinderella’s glass slipper, to no avail.

In the original Brothers Grimm version, however, the stepsisters cut off parts of their feet to try to fit into the slipper, mutilating themselves for a chance at marrying a prince. And, not to spoil the ending, but they also get their eyes pecked out.

These poor tykes are abandoned in the forest and left to deal with a cannibalistic witch. She cages poor Hansel and force-feeds him to fatten him up. Fortunately, when the witch is ready to start cooking her main course, Gretel’s clever enough to see the proverbial writing on the candy wall and pushes the witch into the oven, saving herself and her brother.

Earlier versions of this fairy tale are a bit more gruesome where the Evil Queen is concerned.

First, she cooks and eats the liver and lungs the huntsman brings back, believing them to be Snow White’s.

Second, the story ends with the queen going to Snow White and the prince’s wedding, where she is forced to put on a pair of burning hot shoes and dance until she falls down dead. It’s a wedding worthy of George R.R. Martin’s Game of Thrones series!

The original version of this tale, written by Hans Christian Andersen, is much darker than Disney’s well-known film adaptation.

The price the mermaid must pay for her legs is that every step will feel like sharp swords in her feet. She will be in agony. And if the prince doesn’t marry her, she will die and turn to sea-foam.

If that wasn’t bad enough, the prince doesn’t choose her. Even after she subjects herself to immense pain when she dances for him to try to win him over.

Her sisters give her a magic dagger and try to convince her to kill the prince in his sleep, because if his blood touches her feet, she will get her fins back and live. But she can’t do it, and so she dies and turns to sea-foam.

In the original Brothers Grimm story, both Little Red Riding Hood and her grandma are eaten by the wolf.

But never fear—a hunter comes and kills the wolf, slicing open its belly to free Little Red and her grandmother. Ew.

Jack and the Beanstalk:

This tale of a massive beanstalk, a man-eating giant, and golden eggs has roots that go back 5,000 years! In the earliest versions, our unscrupulous hero gains the sympathy of a man’s wife, and eventually robs and kills him.

Later versions attempted to justify Jack’s thieving behavior and make him more of a protagonist by stating that the giant killed Jack’s father, or that the giant regularly chowed down on local oxen and children.

Earlier versions of this story have a (sort of) happy ending—but they take a horrific detour to get there.

Rapunzel is impregnated by the prince who has been visiting her, and the witch finds out. She cuts off Rapunzel’s hair and banishes her to a faraway place.

When the prince comes back, the witch uses Rapunzel’s hair to trick him into climbing up into the tower, where she’s waiting for him so she can tell him he will never see his beloved Rapunzel again.

He jumps from the window in despair, and his eyes are pricked out by the thorns below. Blind, he wanders for years while Rapunzel struggles to raise their child.

We did promise a happy ending here, didn’t we?

Eventually the prince and Rapunzel find each other again. Her tears heal his eyes, and they are able to live happily together.

Goodness, it was tough to have a happy ending before Disney intervened in many of these classic fairy tales!

Question: Do you prefer the dark versions or the Disney versions of these stories?