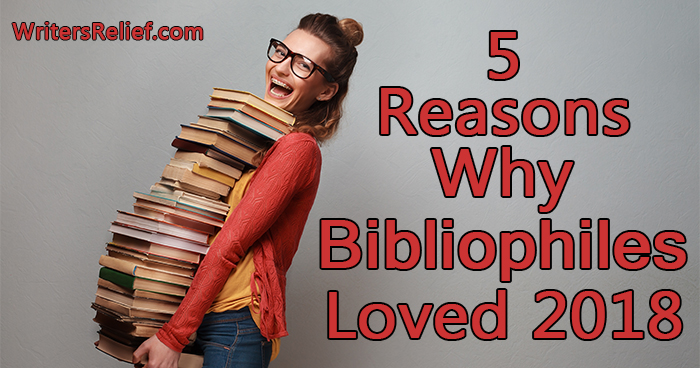 From a car launched into space to a royal wedding, 2018 had its moments to remember. Writer’s Relief takes a look back at what was especially noteworthy for bibliophiles and bookworms in the past twelve months. Check out our literary-themed year in review:

This past year, the Great White Way had two long-awaited literary classics come to the stage. Harry Potter fans finally got to see their favorite characters come to life when Harry Potter and the Cursed Child arrived on Broadway. A smash in London, the play has been a success critically and commercially stateside, winning the 2018 Tony Award for Best Play. The Cursed Child has plans to open in Australia, San Francisco, and Germany.

Aaron Sorkin’s adaptation of Harper Lee’s classic To Kill a Mockingbird also opened on Broadway this year in a production starring Jeff Daniels as Atticus Finch, the iconic lawyer whose fight for civil rights has endured for generations.

The Best Movies Were Based On Our Favorite Stories

Several of 2018’s best movies were based on popular books! Steven Spielberg released his adaptation of Ernest Cline’s pop-culture-reference-laced Ready Player One. Crazy Rich Asians, based on the book by Kevin Kwan, was a sleeper smash earlier this summer. And Becky Albertalli’s coming-of-age story Simon vs. the Homo Sapiens Agenda was adapted into Love, Simon.

Sidenote for writers: Movies can provide great motivation for your writing. Here are some movie monologues to inspire you!

This was a year for booklovers to geek out over their favorite writers! Authors who released new books in 2018 included Meg Wolitzer (The Interestings, The Wife), who released The Female Persuasion; Kristin Hannah (The Nightingale, Winter Garden), who gave us The Great Alone; and Barbara Kingsolver (The Poisonwood Bible), who published Unsheltered.

This past year was also filled with breakout hits from debut authors! A.J. Finn’s The Woman in the Window gave fans of Gone Girl and The Girl on the Train a new book to be thrilled and chilled by. Chloe Benjamin’s The Immortalists offered readers a sprawling epic family drama. And Mary Lynn Bracht’s White Chrysanthemum captivated us with its passionate story of two sisters separated by World War II. All of these books gave readers new authors to watch!

2018 was a stellar year for nonfiction. Tara Westover’s memoir, Educated, told the story of one young woman’s foray into education at a late age. Unmasked by Andrew Lloyd Webber recounts his success and failures during his five decades as the king of musical theater. Zora Neale Hurston’s Barracoon, a controversial depiction of the last “black cargo,” was finally released eighty years after it was written. Michelle McNamara’s frightening I’ll Be Gone in the Dark recounted her obsessive search for the Golden State Killer. And Michelle Obama’s Becoming gave us a glimpse into events that shaped the life of one of today’s most compelling women.

Question: What was your favorite book from 2018?