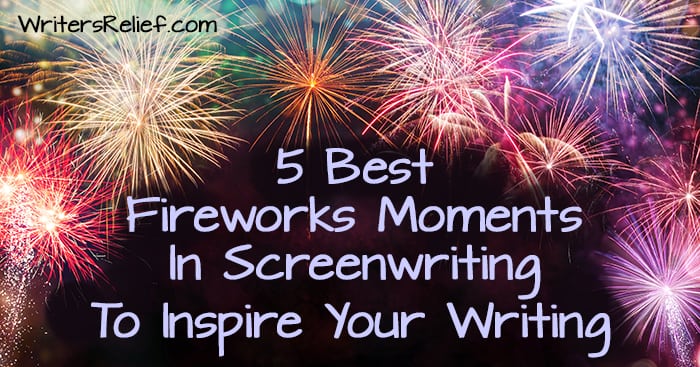 At Writer’s Relief, one of our favorite summertime activities is watching Fourth of July fireworks displays! For writers, fireworks can be symbolic for both your story and your characters. Some of our favorite films have featured fireworks in ways that illuminate (no pun intended) both plot and character in inspiring ways!

Spoiler Alert: This article may contains spoilers for the films listed below. While these films have been around for a while, we want to be considerate of people who haven’t seen them yet.

Set in a theme park during 1987, Adventureland is about two park employees, James and Em. During the park’s annual Fourth of July celebration, the two cuddle up to watch the display and express their feelings for one another. With “Don’t Dream It’s Over” by Crowded House playing in the background, the fireworks lighting up the sky set off sparks of romance between the two young lovers.

This epic love story between Jack and Ennis in rural Wyoming follows their individual lives and marriages. At one point in the film, Ennis is at a fireworks display with his wife and kids when a drunk biker questions his sexual orientation. Ennis reacts with a burst of violence as the fireworks explode behind him.

Harry Potter and the Order of the Phoenix

During the fifth installment of the Harry Potter film series, Hogwarts is overtaken by the tyrannical Dolores Umbridge, whose overly stringent rules and borderline sadistic methods of punishment create an atmosphere of fear and anxiety. Leave it to the prankster Weasley twins, Fred and George, to rebel spectacularly. Flying into an exam hall on broomsticks, the Weasley twins throw magical fireworks that chase Umbridge out of the room and shatter all the frames holding her many decrees. Finally, the twins make their grand exit leaving a dazzling “W” in their wake. Now that’s how you spark a revolution!

The Hobbits gather to celebrate the 111th birthday of Bilbo Baggins. It’s also the 33rd birthday celebration, or “Coming of Age,” for his nephew Frodo Baggins. The wizard Gandalf contributes his fireworks to the celebration, which impress the Hobbits by shaping into trees, birds, and ships. Of course, no fireworks display is complete without a grand finale. Gandalf concludes the spectacle by showing off a dragon firework that swoops through the air and explodes into a brilliant series of fireworks. A celebration to remember, indeed!

In this classic Disney/Pixar film, Buzz Lightyear lands in the clutches of next-door neighbor Sid, and Woody sets out to rescue him. The stakes are raised when the destructive Sid straps Buzz to a rocket with the intent of making him explode. However, Woody is eventually able to use the same rocket to bring both him and Buzz to safety, proving that rockets can be both a source of destruction and reparation.

Question: What is your favorite fireworks moment in film?