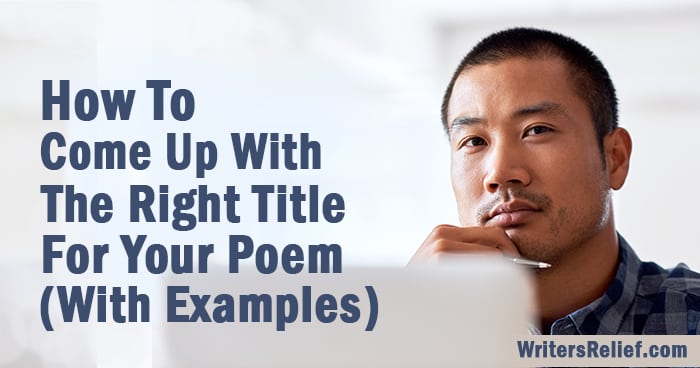 Sometimes, coming up with the title for your poem can be harder than writing the actual poem! Your poem’s title should catch your reader’s interest and entice them to read on, so it’s important to make a great first impression. For inspiration, Writer’s Relief presents a list of  examples from the best literary poems of all time.

Examples of Great Poem Titles—And What Makes Them So Good

Choose evocative language. Your poem’s title is an opportunity to lead with a gripping, memorable image. “Stopping By Woods On A Snowy Evening” by Robert Frost is a great example of a poem title that conjures an immediate sense of mood, time, and place.

Lead with an archetype. Archetypes are powerful tools for storytellers and poets, functioning as a kind of emotional shorthand that can trigger an immediate reader response. For example: Edgar Allan Poe’s “The Raven” taps into an animal archetype that evokes shivers (and suggests canny intelligence) even before we read a word of the poem. Alfred Noyes’s classic poem “The Highwayman” leans similarly on a character archetype.

Go for the emotional jugular. Mary Frye’s “Do Not Stand At My Grave And Weep” hits readers hard with heart-wrenching drama and a bold demand.

Raise a question/conflict. We love the title of Maya Angelou’s poem “Still I Rise.” Not only do the monosyllabic words make a big impact, but the meaning of the words suggests an inherent conflict—an opponent or obstacle that requires conquering (again and again). But what is this obstacle? The title makes us want to read on to learn more.

Use a single word. One-word poem titles can be tricky to pull off. Choose the wrong word and readers might skip over your poem. If you’re going to try a one-word title, choose a word that has complicated or even polarizing meaning. Examples include Allen Ginsberg’s “America” and Sylvia Plath’s “Daddy.”

Make use of an “offhand remark.” Billy Collins’s title “Another Reason Why I Don’t Keep A Gun In The House” is the perfect example of a title that reads like an aside. Of course, the poem’s statement is—perhaps ironically—anything but tangential.

Use a character’s name. If the subject of your poem is a character with a great name, use it in the title. T.S. Eliot is remembered for his poem entitled “The Love Song Of J. Alfred Prufrock.” Shel Silverstein’s title “Mr. Grumpledump’s Song” is just plain hilarious.

Focus on a place. Poetry titles like “In Flanders Fields” by John McCrae or “After Auschwitz” by Anne Sexton bring readers immediately to their core subject matter without any detours.

Embrace humor or quirkiness. James Tate’s poem “The List Of Famous Hats” tickles us and makes us want to read more. And the peculiar-sounding title of Lewis Carroll’s “Jabberwocky” lets readers know something fantastical is in store.

Omit the title. You don’t have to give your poem a title at all—and some poets prefer this style. But if you choose to call your poem “Untitled,” keep in mind that some editors prefer works that have clear, “Googleable” titles. However, if “Untitled” truly is the best title for your poem—then we say go for it.

Titles And Copyright Law For Poets

Current copyright law states that authors cannot copyright the titles of their poems—which means any poem title is up for grabs, even if it has been used before. That said, we don’t recommend using the same title as another poem, if you can help it. Better to be original.