7 Contemporary Poets You Should Be Reading | Writer’s Relief 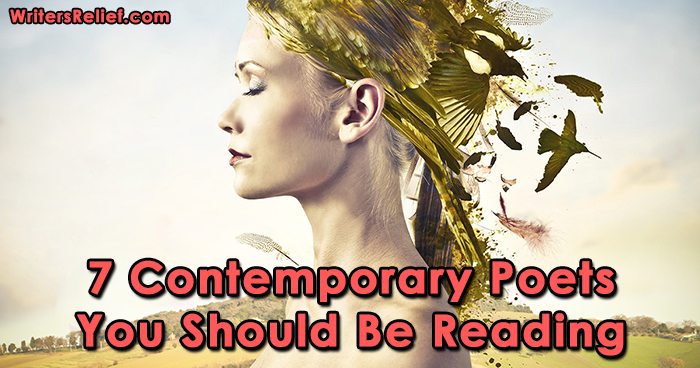 How are you celebrating National Poetry Month? At Writer’s Relief, we recommend immersing yourself in contemporary poetry—inspirational and innovative poetry that has been written in the last hundred years or so. Here are some of our favorite contemporary poets!

Brenda Shaughnessy currently teaches at Rutgers University Newark and has won several American poetry prizes. Shaughnessy is the author of Human Dark with Sugar and Interior with Sudden Joy, among other works. She is also the poetry editor of Tin House.

In The New Yorker, Hilton Als said of Shaughnessy’s book Our Andromeda: “It further establishes Shaughnessy’s particular genius, which is utterly poetic, but essayistic in scope, encompassing ideas about astronomy, illness, bodies, the family, ‘normalcy,’ home.”

Poet/playwright Derek Walcott was born on the island of Saint Lucia in the West Indies, where he was trained as a painter. He published his first poem in the local newspaper at the age of fourteen. His breakthrough collection, In a Green Night: Poems 1948–1960 (1962), celebrates the Caribbean and its history. In 1992, Walcott won the Nobel Prize in Literature. The Nobel committee described his work as “a poetic oeuvre of great luminosity, sustained by a historical vision, the outcome of a multicultural commitment.”

Feminist poet Sharon Olds draws on her dysfunctional upbringing and family life to inform her unflinchingly honest, raw poetry—laced with sharp humor and surprising insights. Stag’s Leap is a diary-like book that follows her heart-wrenching divorce, and won both the Pulitzer Prize and Britain’s T.S. Eliot prize.

Carol Ann Duffy, chair of the final T.S. Eliot judging panel, said of Stag’s Leap: “This was the book of her career. There is a grace and chivalry in her grief that marks her out as being a world-class poet. I always say that poetry is the music of being human, and in this book she is really singing. Her journey from grief to healing is so beautifully executed.”

The winner of the 2015 Pulitzer Prize for Poetry for Digest, Gregory Pardlo views modern U.S. identity through both fatherhood and issues of race. He is the author of Totem (2007), winner of the APR/Honickman First Book Prize, and winner of the Pulitzer Prize for Poetry. The Pulitzer judges commended Pardlo’s “clear-voiced poems that bring readers the news from 21st-century America, rich with thought, ideas and histories public and private.” Pardlo is an associate editor for the literary journal Callaloo and teaches creative writing at Columbia University.

British poet Alice Oswald won the T.S. Eliot prize in 2012 with her second collection, Dart, an epic, book-length poem that was the result of years of research into the people, history, and landscape found along the River Dart in Devon, England. Her other collections of poetry include Woods, etc. (2005), winner of a Geoffrey Faber Memorial Prize; Weeds and Wild Flowers (2009); A Sleepwalk on the Severn (2009); and Memorial (2011), which won the 2013 Warwick Prize for writing. Her latest book is Falling Awake (2016).

A recipient of the National Book Critics Circle Award in 2012 for Useless Landscape, or A Guide for Boys, D.A. Powell’s poetry “blends the mythology of gay culture with the idiosyncrasies of his own voice and experience.” Powell has taught at Harvard University, Columbia University, and the University of San Francisco. He has been awarded the Lyric Poetry Award from the Poetry Society of America, a grant from the National Endowment for the Arts, and a Paul Engle Fellowship from the James Michener Foundation.

And finally, whenever you need a laugh or a pick-me-up, visit Shel Silverstein’s second collection of poems, Where the Sidewalk Ends, which opens with this impossible-to-ignore invitation to poetry lovers of all ages:

Question: Who is your favorite contemporary poet?