by Writer's Relief Staff | May 31, 2017 | Inspiration And Encouragement For Writers | 2 comments 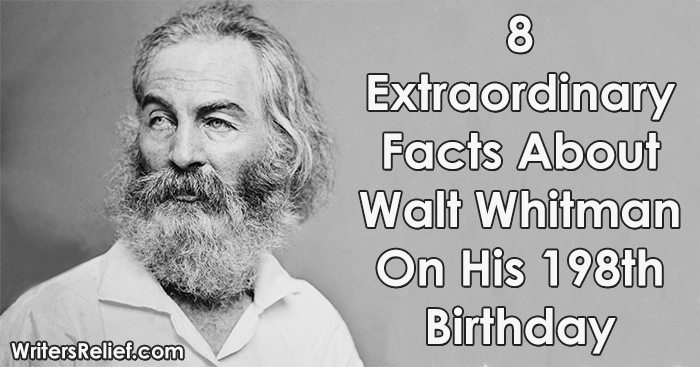 Today marks the 198th birthday of legendary American poet Walt Whitman! His signature rhythmic, free-verse style made him one of the most important poets of the nineteenth century, and his work is still beloved today. To commemorate his birthday, Writer’s Relief brings you eight surprising facts about this master poet!

The first edition of Whitman’s masterpiece, Leaves of Grass, included only twelve poems. Whitman’s first publication of poems was quite modest, but due to praise from other transcendentalist poets like Ralph Waldo Emerson, he continued adding to this collection until his death. The final edition of Leaves of Grass contained over 400 titles!

After leaving school at the age of eleven, Whitman was largely self-taught. Though Whitman enjoyed getting an education, family financial troubles led him to leave school and get a job at a very young age. However, he continued reading anything he could get his hands on and even became a teacher when he was seventeen.

Before he was a published poet, Whitman was a newspaper editor—and a controversial one at that. Journalism was always Whitman’s passion, and he actually founded a small newspaper on Long Island. But his radical opinions on issues like slavery resulted in him bouncing between jobs.

Whitman once met Oscar Wilde. Wilde visited Whitman’s home in New Jersey (also our home state!). The two wrote letters back and forth for years.

Whitman was the inspiration for Dracula. Whitman also corresponded with Bram Stoker—and Stoker claims that Whitman’s personality gave him his inspiration for his famed monster. (Hopefully Whitman would see that as a compliment!)

Whitman volunteered as a nurse during the Civil War. Whitman traveled to a Civil War battlefield to check on his brother, George. He was so upset by the sight of the wounded soldiers that he decided to stay and help.

Walt Whitman designed and built his own tomb. Whitman lived out his final days in Camden, New Jersey, and is buried there in Harleigh Cemetery.

And perhaps the most surprising fact…

A book by Whitman was published posthumously in 2016! A graduate student discovered a long-forgotten Whitman novella in the Library of Congress. The novella had previously been published only once, anonymously, in a six-part newspaper series.