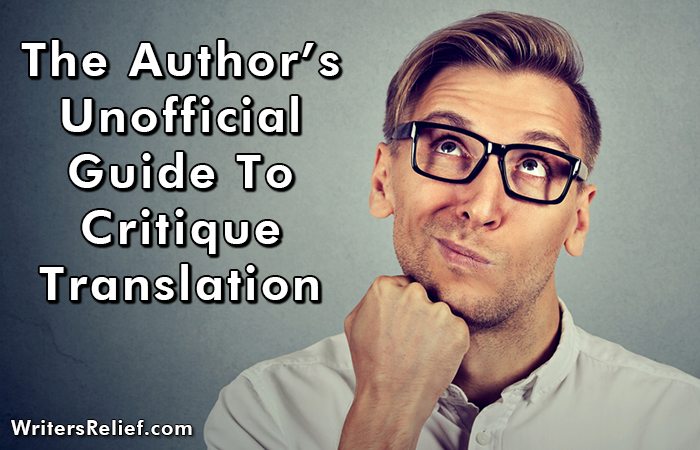 Having your writing critiqued—or offering a well-meaning critique—during a workshop or writers group meeting can be an emotional minefield. Some writers are too sensitive to accept anything less than an enthusiastic bravo! Others are too quick to dismiss critique from peers who “just don’t get it.” But being able to accept critique and make effective use of good feedback is what most writers should strive for.

And if you think accepting critique is difficult, giving useful critique can sometimes be even harder, especially when you have to walk on eggshells to avoid unhappy outbursts. As a result, readers who are offering their thoughts on a piece sometimes have trouble expressing what they’re trying to say. If you’ve ever wished you could have a translator that decodes what people say versus what they really mean, this is for you!

How To Interpret Critique From Your Writing Group

What They Said: I just don’t understand what’s motivating this character.

What They Really Mean: I’m not feeling a deep personal connection with this character.

What You Should Do: Readers who talk about a disconnect between themselves and a given character aren’t feeling a deep sense of empathy. Take steps to make your character seem more real and human. Be sure that your character’s vulnerabilities are clear to readers (vulnerability makes it easier for readers to “feel” for a character). Learn more about how to write characters people care about.

What They Said: This doesn’t seem believable.

What They Really Mean: The text hasn’t fully prepared me for this moment, and so I can’t suspend my disbelief and accept it.

What You Should Do: Consider foreshadowing. When readers feel that a plot point “comes out of nowhere,” they often haven’t been properly prepared for it. Also, take some time to review the tone of your story—does it change dramatically at a point that is jarring your readers? Finally, consider a substantial rewrite: Even if your story is inspired by something that really happened, that doesn’t mean it’s believable. Sometimes, fiction seems truer than fact.

What They Said: This story just doesn’t speak to me.

What They Really Mean: I just don’t feel like this story grabs me and pulls me in.

What You Should Do: Look at the little details. If your readers are telling you that they can’t picture themselves inside the story, you might not be giving them enough details related to the physical senses. Small details like the color of a cup or the sound of passing cars allow readers to feel as if they are immersed in a scene. See what happens when you delve a little more deeply into detail.

What They Said: I’d like to see more of [this element].

What They Mean: The element in question may be underdeveloped.

What You Should Do: When readers are asking for more, they don’t just want to see additional page time [aka “real estate” in writing-group-speak] dedicated to an element. They want a deeper exploration of that element. Are there facets of the element that can be explored for a more insightful, intense experience?

Final Thoughts On Making Revisions Based On Critique

One of the best parts of being a writer is your ability to save your original work, then experiment with future drafts. Painters who apply an experimental layer to their canvas run the risk of messing it up (just like sculptors who decide to get creative with a hammer). But you, writer, can try new ideas as much as you want—as long as you save the original in its own file.

When working with a critique group or critique partner, embrace your freedom to explore new ideas. If you try a suggested change but don’t like the results, you can always return to your original draft. By boldly experimenting with revisions, there’s nothing to lose; you’ll gain experience, perspective, and improved technique—even if you decide you like your original draft better.

QUESTION: What common phrases do you hear at writers group critique and workshop sessions?

← Here's Why Writing Is Both Awesome And Intimidating ProofNEEDing: New Yeer's Resolution →