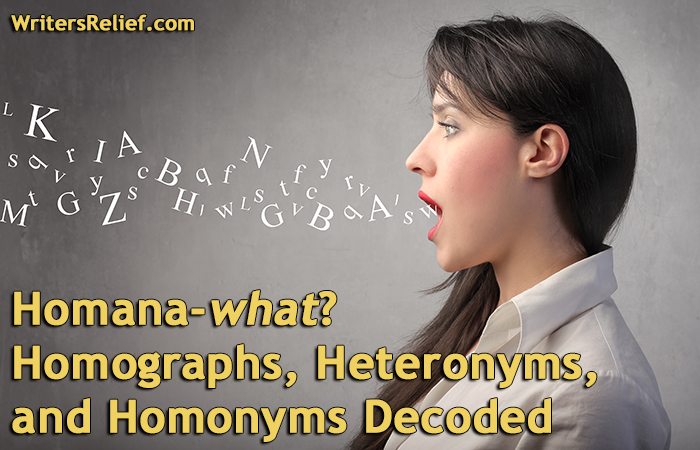 The English language can be tricky to navigate, but as a true-blue grammar geek, you’re probably an expert at correctly using to, too, and two—and you’d never make the rookie mistake of using it’s when you mean its. But just when you’re feeling pretty good about your grammar chops, along come homographs, heteronyms, and homonyms…and you find yourself scratching your head, wondering, Homana-what?

Homographs and heteronyms are sub-categories of homonyms, an umbrella term for words that are spelled or pronounced the same but have different meanings. The term is derived from two Greek words: homo, which means “same,” and “onym”, which means “name.” Together, they mean “same name.”

The Difference Between Homographs And Heteronyms

Homographs are words that are spelled the same, but change meaning depending on the context:

Heteronyms are a subset of homographs in which words are spelled the same, but change meanings when pronounced differently:

While homographs and heteronyms can be fun to use while writing, be sure to use the correct interpretation of the word in the correct context. Does your character feel happy and “content,” or is he about to read through the “content” of a mysterious book? Does the rowdy bar crowd tell the police officer everything is “fine,” or are they all receiving summonses for disturbing the peace and now have to pay a big “fine”?

Although pronunciation is important in determining a word’s meaning, how the word is used in context can also change its meaning entirely. Grammatical function heteronyms are words that, when paired together, take on different grammatical functions:

Ready for another twist? Whether or not a word is capitalized can also change the meaning! Capitonyms are words whose definitions change when capitalized:

And of course, don’t forget about accent marks. Accent heteronyms are words that change meanings with an accent mark:

Feeling dizzy? Well, hold on, because we’re not stopping there. Three-way heteronyms are words that have three different pronunciations depending on the context:

Homographs And Heteronyms: Handy To Have Around

Rife with the possibility of double meanings, homographs and heteronyms offer interesting ways to come up with a fun title for your book, poem, or short story. One example is What To Expect When You’re Expecting, which refers to anticipating as well as pregnancy.

Remember: The easiest way to make sure you’re avoiding grammar gaffes and are using the words in your writing correctly is to have your work professionally proofread.

QUESTION: What are some of your favorite uses of homographs or heteronyms?