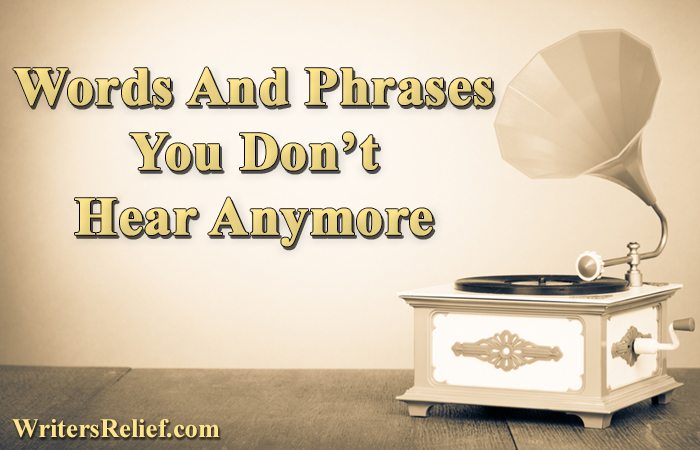 When was the last time you heard the words “Yellow Pages” or “breeches” used in a conversation? If you’re of a certain age, it’s probably been decades since you’ve worn pedal pushers or dialed a rotary phone. And if you’re a millennial—you’ve probably never used these terms! We’ve dusted off some of the more unique words and phrases you don’t hear anymore and listed them here. Perhaps some of these will add a sense of nostalgia or historic accuracy to a story or poem you’re writing!

11 Words And Phrases That Have Fallen Out Of Use

Bookwright – If you’re reading this article, it’s possible you’re among the underappreciated ranks of bookwrights. The term refers to a writer of books, but it was usually used with a shade of condescension. Maybe it’s time to reclaim the word as a rallying call!

California widow – Use of this phrase peaked during the war years, and it has now all but disappeared. A “California widow” is a married woman whose husband is away from her for an extended period.

Double dog dare – You might remember this phrase from your childhood, when it was used to defiantly challenge someone. We wouldn’t recommend accepting a double dog dare—especially if a frozen flagpole is involved—but we double dog dare you to use it in a conversation soon!

Gadzooks! – This exclamation of shock or surprise hasn’t been regularly used since the 17th century. Which is a shame, because it’s a fun way of expressing astonishment!

Groak – You might have been on the receiving end of someone’s groaking at least once when eating a tasty meal. To “groak” is to stare at someone who is eating with the hope that you’ll be offered some food. Maybe you’ve even done your fair share of groaking!

Groovy – For tech-savvy millennials, “Groovy” is a programming language for Java. But for those of us who remember tie-dye and bell bottoms—from the first time they were popular—“groovy” was a hip way to say marvelous or excellent.

Jalopy – Today we’d refer to a dilapidated old car as a “lemon”  or a “clunker,” but at one time a beat-up, obsolete car was called a “jalopy.”

Snoutfair – Think of the most attractive person you know. Believe it or not, telling them they’re “snoutfair” is the best compliment you can give them! In the 16th century, someone who was “snoutfair” was pretty or handsome. Of course, to the person you’re admiring in this century, it may sound more like an insult—and you may not get the reaction you’re hoping for.

Twitter-light – Long before Twitter rose in popularity as a social media platform, people in the 17th century used the word “twitter-light” to mean “twilight.” Here’s a great mashup idea: Live tweet the sunset on Twitter at twitter-light!

Zounds! – Meet gadzooks’ brusquer sister! This mild oath, a euphemism for “God’s wounds,” was first used in 1592. A similar euphemism that’s still in use today: “Crikey!”

QUESTION: What other outdated expressions do you know?

← ProofNEEDing: How old are you now? Don't Procrastinate! Use These 8 Tips To Get Your Writing Back On Track →