Limericks: There Once Was A Poem From Nantucket… 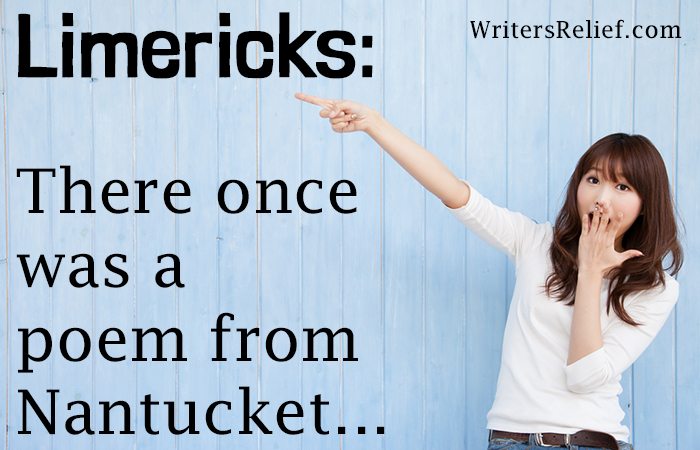 Often humorous, sometimes naughty, yet always entertaining, limericks are believed to have originated in (no, not in Nantucket—but we’ll get to that) Ireland’s County of Limerick. The oldest discovered text in the limerick format was a Latin prayer written sometime during the thirteenth century.

Limericks came into mainstream popularity during the mid-1800s thanks to author and poet Edward Lear. Lear’s A Book of Nonsense featured several limericks accompanied by related illustrations. Since then, limericks have woven their way into literature and the hearts of many amused readers.

So What Exactly Is A Limerick?

Typically, a limerick is just five short lines with the first, second, and fifth lines rhyming. The third and fourth lines also rhyme, creating a total rhyme scheme of AABBA.

Limericks are written using the anapest rhythm/metering system. With anapest, the leading few words or syllables are short, and the final syllables are usually longer and more stressed. Here’s an example:

Here is a limerick beat,

It’s not a trick or a feat.

The beat can flow

See how it goes

This is a limerick beat.

Though the limerick has a reputation for tackling frivolous, humorous subject matter, even the most well-known authors have had fun with the form. Here’s a limerick on the state of novels by classic sci-fi author H.G. Wells:

Our novels get longa and longa

Their language gets stronga and stronga

There’s much to be said

For a life that is led

Limericks tend to be popular in children’s literature. Here’s one you may recall—and probably didn’t even realize it was a limerick!

The mouse ran up the clock.

The clock struck one,

And down he run.

This famous limerick appeared in Princeton University’s humor magazine Princeton Tiger in 1902 and details the bad luck of an unfortunate man from Nantucket:

There once was a man from Nantucket.

Who kept all his cash in a bucket.

But his daughter, named Nan.

Ran away with a man,

And as for the bucket, Nantucket.

This limerick gave rise to multiple versions, as there are many ways to rhyme with “Nantucket”—and not all of them appropriate for mixed company!

And the most important part of any good limerick? A great punchline!

There was an old man with a beard

Who said, “It’s just how I feared!

Two owls and a hen

Four larks and a wren

Have all built their nests in my beard.”

Like most forms of rhyming poetry, limericks may be hard to place. To get a limerick published, it will have to be especially strong in both content and technique. Limerick writers may want to target their poems to magazines that focus on rhyming poems or humor.

QUESTION: Do you find limericks to be an engaging and entertaining format, or would you rather see them rhythmically saunter out of existence?