15 Literary Classics In 15 Seconds Or Less! 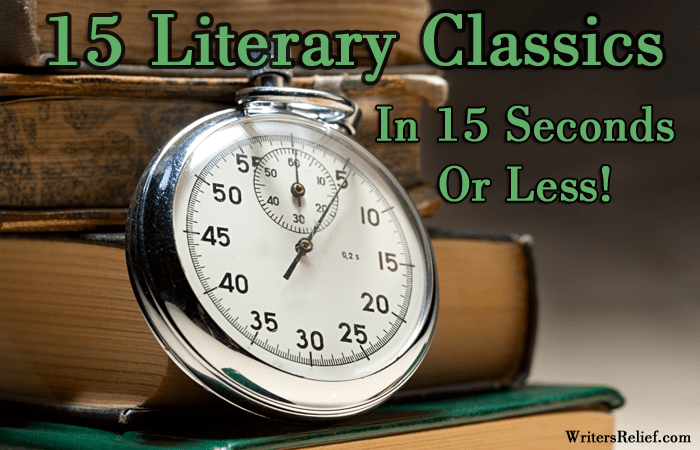 Thanks to technology, the Internet, and social media, we’re fast becoming a society of speed readers! Inspired by the folks at Book-A-Minute, we took a look at fifteen of our favorite novels and plays and condensed them into shorter (and funnier!) versions you can read in less than a minute. If you haven’t read these literary classics before, be warned: potential spoilers ahead!

1. The Stranger by Albert Camus

Meursault: The sun is so bright. (Shoots a man dead. Then shoots his corpse four more times.)

Chaplain: Turn to God before you are executed.

Hamlet: Dad, you’re so lame. Everything is lame.

Ophelia: I am drowned!

Polonius: I am stabbed!

Claudius: I have received my comeuppance!

Hamlet: I am fatally wounded!

3. Moby-Dick; or the Whale by Herman Melville

Ahab: The white whale took my leg; I will take its life.

(Many, many pages devoted to descriptions of different species of whale and other sea creatures.)

Ahab: My relentless pursuit of revenge will surely not end tragically!

(Everyone except Ishmael dies.)

4. A Christmas Carol by Charles Dickens

Ghost of Christmas Past: What happened to you, Scrooge?

Ghost of Christmas Present: What’s happening to you, Scrooge?

Scrooge: Oh…I guess I’ve been kind of a jerk. My bad!

Cosette: I’m so pampered that I have no concept of real life.

Jean Valjean: I have spared your life!

Javert: About that… (Drowns himself.)

Nick: I’m excited to be in New York!

Daisy: Don’t name your children after me.

The Eyes of Dr. T. J. Eckleberg: Everyone misses the point.

Oedipus: I must stop this plague!

Tiresias: You’re blinder than I am. And I’m actually blind.

Oedipus: I’ve accidentally murdered my father and married my mother!

8. The Metamorphosis by Franz Kafka

Gregor’s Sister: Even though I think you’re repulsive, here’s some milk.

Gregor’s Boss: You’d better have a good excuse for why you didn’t come into work.

Lady Macbeth: You should be king.

Macbeth: I should be king!

Macbeth: I will forever be king!

Mrs. Dalloway: Also, I wish I never married you.

Sally Seton: We totally made out back at Bourton.

Mrs. Dalloway: I have a party to host.

Peter Walsh: I still love you.

Winston: Life has always been boring.

Julia: It doesn’t have to be.

The Party: Did you do the thing?

Winston: I did the thing.

12. As I Lay Dying by William Faulkner

Addie: Bury me in Jefferson. (Dies.)

Cash: I broke my leg.

Darl: I started a fire.

13. The Crucible by Arthur Miller

Thomas Danforth: Clearly, you are telling the truth.

(Everyone accused is hanged.)

14. The Call of the Wild by Jack London

(A domesticated dog makes a life for himself in the wild.)

(Literally the opposite of The Call of the Wild.)

QUESTION: What book do you think should get the Book-A-Minute treatment? Sound off in the comments!