How To Write Haiku That Editors Will Publish 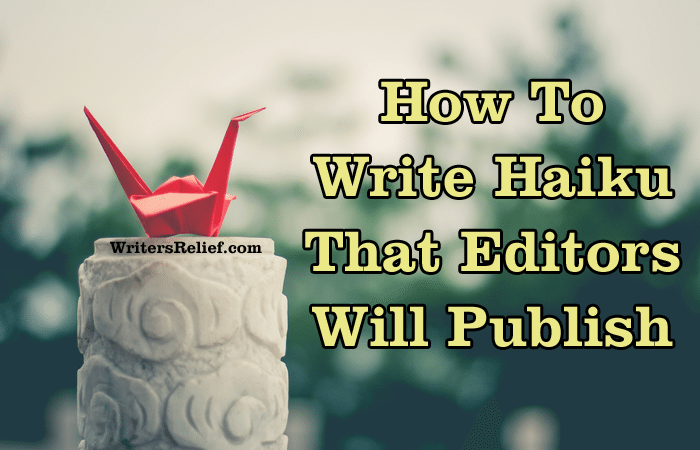 Few literary journal editors will come right out and say, “We’re not publishing haiku right now.” And yet, when we at Writer’s Relief take a look at what our clients are getting published and what they’re not, haiku is usually low on the list for acceptance letters from literary magazines. It seems that haiku, and traditional poetic forms in general, have been usurped in popularity by free verse.

That said, it is entirely possible to get good haiku published. But you’ve got to do two things—first: Know where to submit your haiku. If you send your poems to a literary journal that embraces haiku, you’ll have a better chance of getting your work published (you can also submit to any literary journal that doesn’t prohibit haiku submissions). Second: Write haiku that is really, really good.

Many people believe that writing verse in a 5-7-5 syllable pattern means—ta da!—they have created haiku. But, in the same way that most literary journals eschew rhyming poetry, the 5-7-5 pattern is actually discouraged by most Western/English language haiku journals.

The simple definition of modern haiku is: three not-rhyming lines that total seventeen or fewer syllables. Modern haiku has a “free form” sensibility similar to free verse. Often, the haiku has a season image. Because brevity is key to a good haiku, there is a list of kigo—words attributed to specific seasons—that haiku poets can use as shorthand to quickly convey the time of year in the poem.

There are also poetry forms that developed from the same source as haiku and are very similar to (and are often confused with) haiku: senryu and zappai. Senryu does not have a season word; instead, it is focused on human nature. A senryu often has a touch of humor or irony. Zappai, or “pseudohaiku,” is a short poem with a “fortune cookie” sensibility. Many haiku journals will include senryu under the haiku umbrella, but some make the distinction and therefore are more likely to accept only one or the other.

Present a moment of awareness. Behind the simple wording and sparse imagery of haiku is a moment of epiphany. Sometimes the reader must be an active participant in the poem and determine what the enlightenment is. It’s there: elusive, yet in view—the aha! moment of unexpected realization.

Have juxtaposition. A good haiku poem offers a big idea in a small package. Two juxtaposed images will often augment, challenge, and define each other. Metaphor and simile should be used carefully and sparingly.

Engage the senses. A haiku doesn’t just paint a picture of an image; it invites readers to inhabit an image through the senses.

Use a light touch. While classic haiku can be pensive, it can also feature double meanings and humor. The core message of the poem hinges on the way the reader interprets the word or phrase in question.

Include only what is essential. A great haiku does not have any unnecessary words. Capture the moment and say what you mean as succinctly as possible.

You can see some of these elements in this haiku by award-winning contemporary haiku poet Lee Gurga:

QUESTION: Have you tried to publish any haiku? Were you successful?

← Literary Librarians Who Smash The Stereotype Celebrate Shakespeare With A "Shakespeare Selfie"! →