Interview With An Author: Amit Majmudar 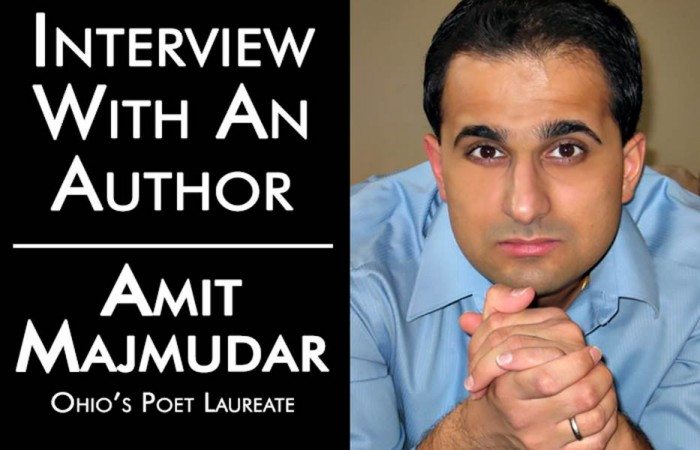 Amit Majmudar, Ohio’s first poet laureate, is a novelist, poet, essayist, and diagnostic nuclear radiologist (MD). Majmudar is the author of two novels and several poetry collections. He was a finalist for a Poetry Society of America’s Norma Faber First Book Award, and his poetry was selected for a Donald Justice prize. His most recent collection of poems, Dothead, was published in March. Majmudar’s poetry has appeared in The New Yorker, The New York Review of Books, The Atlantic Monthly, Poetry Magazine, and The Antioch Review. His work has been featured in several anthologies, including Best of the Best American Poetry, 1988–2012.

Majmudar is also the judge for the WaterSedge Poetry Chapbook Contest. The contest winner will receive: $500 cash prize; publication of the poetry chapbook in both print and e-book formats; Amazon distribution for Kindle and print; and twenty-five free print copies. Deadline is May 25; see the WaterSedge contest page for complete details and submission guidelines.

BONUS: Leave a comment by April 12, and you’ll be entered to win a copy of Amit’s book Dothead! U.S. residents only. This contest is now closed. Congratulations to our winner, Katrina B!

Will you tell us more about Dothead, your latest poetry collection?

Dothead is a collection of poems written over the past few years on a variety of subjects, in a variety of styles, and published in many different places. It’s an omnium-gatherum, held together largely by a single, hopefully unmistakable, hand.

I spent years publishing in magazines on my own, but I never bothered to send anything to an agent. Then I started writing novels, so I sent a big box of my stuff out to an agent in Manhattan who got my name from the editor of the Kenyon Review. That agent, Georges Borchardt, liked the first thirty pages of Partitions, a novel I had included in the submission—and he agreed to represent it when I finished it. I blazed through writing the book in two months and ten days; shortly afterward I had a contract.

I’ve recently begun using Twitter due to my taking on the role of poet laureate.

I am generally frustrated by the amount of time it takes to get work read and rejected or accepted. I feel the world of literary publishing—both in magazines and when it comes to books—works in terms of six-month or nine-month increments. I don’t understand why, with technology being what it is, an accepted book or poem can’t be shunted fairly quickly into physicality. I’m not asking for the speed of web publishing, but I always feel like I’m emotionally way past a novel or collection by the time it comes out. I overcome this by patience.

Situational. Just as in real life, you can be loved by some people, but leave others entirely cold. You just have to find the right crowd, the right reader, the right editor, the right agent.

I have streamlined my life. I don’t own a television, and I don’t drink or watch sports. Those waste time. I have my day job, my family, my daily workout—but that’s it, other than eating and sleeping. All the rest of my time is for writing and reading…and it’s still not enough! 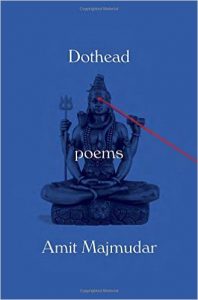 Dothead is an exploration of selfhood both intense and exhilarating. Within the first pages, Amit Majmudar asserts the claims of both the self and the other: The title poem shows us the place of an Indian-American teenager in a mostly white peer group, partaking of imagery from the poet’s Hindu tradition. From poems about the treatment at the airport of people who look like Majmudar to a long, freewheeling abecedarian poem about Adam and Eve and the discovery of oral sex, Dothead is a profoundly satisfying cultural critique and a thrilling experiment in language. United across a wide range of tones and forms, the poems inhabit and explode multiple perspectives, finding beauty in every one.

In a review, poet Billy Collins says of the poetry book, “Dothead amounts to nothing less than a torrent of poetic inventiveness driven by the inexhaustible poetic energy of Amit Majmudar. His delight in deploying his formal skills combines remarkably with his wide range of interests to produce a collection of poetry both riveting and enviable. Drones, torture, immigration, weaponry, James Bond, King Lear, medical practice, Hinduism, and the sex life of Adam and Eve are but a few of the subjects treated here without any sacrifice of lyric texture or pulse. Majmudar stands out clearly and forcefully in the overpopulated tableau of contemporary American poetry.”

BONUS: Leave a comment by April 12, and you’ll be entered to win a copy of Amit’s book Dothead! U.S. residents only. This contest is now closed. Congratulations to our winner, Katrina B!