Sex And Literary Journals: Are Your Sex Scenes Killing Your Shot At Publication? 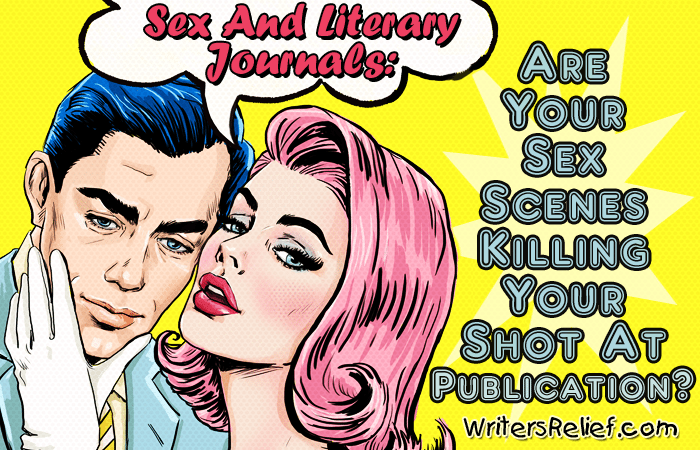 You’ve heard the old maxim “sex sells.” But when it comes to submitting your poems, stories, and essays to literary journals, it’s possible that your sex scenes might just be too much of a good thing!

Because the majority of literary journals focus on literary writing as opposed to commercial-style writing, too much sex can actually be a turnoff to editors. But how can you know if the explicitness of your poem or short story is helpful or harmful to your publishing odds? Is it okay to submit writing that contains graphic sex scenes to literary magazines?

Let’s look at the varying levels of explicitness that can be found in lit mag submissions, as well as the general reactions of readers. But keep in mind that every literary journal is unique, and no two lit mag editors will have the same policies (or proclivities) when it comes to sex scenes in literature.

Sensual. This kind of peek between the sheets is less about raw description than it is about carefully coded evocative language. Sensual works focus primarily on character interactions that are filled with sexual tension—as opposed to actual sex. Writers who embrace a sensual style tend to offer a hint of sexiness; then—when things begin to progress beyond PG-13 physicality—the narrative cuts out with obvious cues as to where the action is headed. Or, the story picks up again with a hint as to what did (or didn’t) happen.

But don’t think that a sensual work isn’t sexy! Some readers prefer when details are left to the imagination. Authors must be especially sensitive and talented in order to write sensual scenes filled with subtlety and implication.

Will lit mag editors love it? The majority of literary journals are open to sensual scenes. So submit with confidence to as many appropriate journals as you can find until you connect with your dream editor! Lots of doors are open for you.

Steamy. Steamy works can be sensual, but they also offer a bit more detail when the characters head into the bedroom. “Steamy” doesn’t mean lingering on sex act details; instead, broad sketches of key actions are clearly portrayed or very strongly implied. The point of a steamy sex scene isn’t necessarily titillation for the reader: Instead, the point is to give readers insight into meaningful interactions between characters. Steamy sex scenes can make characters more three-dimensional.

Will lit mag editors love it? If the steaminess of your sex scene is both tasteful and necessary to character development, many literary journals will be open to publishing your work. In truth, editors often love to include a little sexual intrigue in their literary magazines.

Graphic. Graphic sex scenes leave nothing to the imagination. An explicit sex scene doesn’t mince words or obscure key actions, and the descriptions might even be intended to arouse readers. Graphic sex scenes shouldn’t take the place of or overshadow the work’s core meaning; instead, they should complement and support the author’s primary intentions.

Will lit mag editors love it? If your graphic sex scene is fundamental to the fabric of your story, many literary magazine editors will be glad to read it. But if you can remove the intimate details of your scene without doing material damage to the message or intentions of your work, then literary journal editors might feel that your sex scene is overkill. That said, many works of classic literature feature explicit sex scenes. The key is being judicious about your choices.

QUESTION: Have you ever censored a sex scene that you wrote? Why?

← 19 Of Our Favorite Literary Love Stories Love Is In The Air: Famous Love Poems For Your Sweetie →