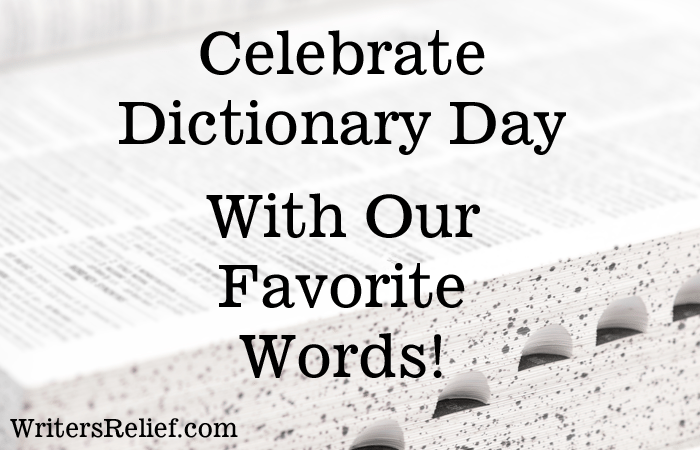 Happy Dictionary Day! Did you know: Dictionary Day is actually the birthday of lexicographer Noah Webster, who published his first dictionary in 1806? Webster started his second, more comprehensive dictionary in 1807—and it took twenty-six years to complete! To celebrate this important day in grammar history (at least, it is to us!), we at Writer’s Relief want to share our favorite words with you.

All definitions are sourced from Merriam-Webster Dictionary and Dictionary.com.

It doesn’t get used enough as a word, but it happens relatively frequently.

I enjoy this word, because as a member of a medieval reenactment society, I am, myself, an anachronism!

The point in the plot, especially of a tragedy, at which the protagonist recognizes his or her or some other character’s true identity or discovers the true nature of his or her own situation

I love classical tragedies and literature; the Ancient Greeks knew what was up. It’s also something that I feel I have personally experienced multiple times in life, serene moments of sublime self/situational-realization.

Opposition to the withdrawal of state support or recognition from an established church, especially the Anglican Church in 19th-century England

I remember my grandfather teaching it to me before I started going to school. He thought it was an important thing for me to know.

Descending from a Greek philosophy that wholly embodies compassion, it is harmonious in sound, in style, in definition—and as we venture through the stresses of life, the idea of transcending that turmoil, up into the echelon of complete serenity, even if for a moment, is alluring and beautiful.

It’s one of my favorite words because when you say it, it sounds luxurious and portrays someone classy and rich, but the word actually means the opposite of what it sounds like.

Bupkus is the alternate spelling for bubkes, but I feel it reads more like it sounds as BUPKUS. Here’s the best part! Origin of BUBKES – Yiddish (probably short for kozebubkes, literally, goat droppings). How can you not love a word with origins in goat droppings?!

Used to introduce something contrasting with what has already been mentioned

It’s a bit inspiring that such a small word could hold so much power—a complete reversal in only one syllable.

I like the way it sounds, and it’s the first word that I liked the sound of.

This is my favorite word purely because of how fun it is to say…I wish I had a more meaningful reason than that, but really, I just love the sound of it.

Including things taken from many different sources

I think it does a good job of describing art, people, and life in general. It’s also really fun to say.

This word perfectly captures more than several occasions in my short life! I love that we can constantly discover a new facet to a person, place, idea, or object that we thought we knew. And it’s refreshing to remember that I shouldn’t take things at face value.

I love flummox because when I use the word in a sentence, most people are confounded by it!

I find it a very comforting word.

Having, showing, or arising from intense often vicious ill will, spite, or hatred

I love it because it’s a word for evil and hatred, and yet it sounds beautiful. If you knew nothing about the word, you’d expect it to mean something nicer.

The word itself evokes a particularly somber feeling. Musical pieces that incorporate the nocturne resonate deeply with me, and thus the word has always been a favorite.

I like the word because I was told that the symbol for om was the sign representing the sound of human consciousness.

I love this word because it encourages people to see common things as strange, wild, or unfamiliar; defamiliarizing what is known in order to know it differently or more deeply.

I love this word because it’s so much fun to say!

A pleasant smell that frequently accompanies the first rain after a long period of warm, dry weather

I just love the way it sounds. And I always thought there was something poetic about rainfall and how it’s often accompanied by such a sweet smell.

Not only do I love the sound of the word, I also think it’s a really specific and evocative adjective to use while writing.

Wendy, who also chose this word, says that she’s partial to serendipity for its meaning, as well as its pronunciation. Such a blithe, lyrical sound!

When I came across this word, I was instantly hooked, both for its meaning and its pronunciation—it’s always fun to sound a little French!

It sounds exactly like what it means—and I love that the English language has such a beautiful word for such a colloquial concept, “ups and downs”!

It so accurately describes the feeling of an intense need to travel, this tug toward the road. It simply captures very well the meaning of a feeling that can be difficult to describe.

It’s my favorite word because it makes me think of marvelous things!

QUESTION: What’s your favorite word? Tell us in the comments below!