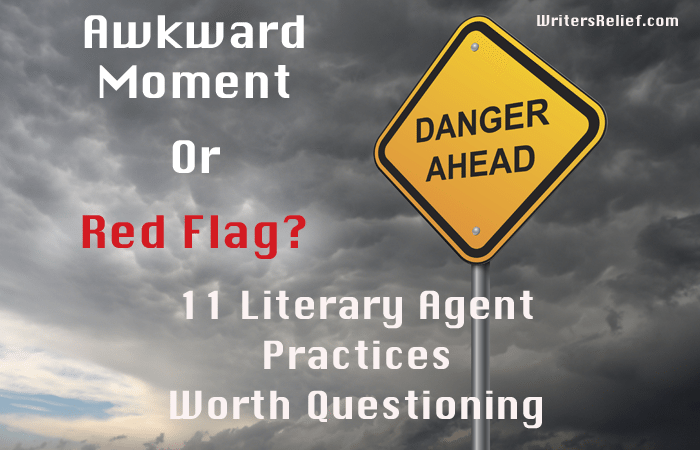 Some literary agent practices are honest and aboveboard. Others fall into an awkward, ethical gray area—and some of these practices should send writers running for the hills. Here’s how to make sense of questionable literary agency practices when you’re not sure what to do.

Literary Agency Practices: How To Tell The Dubious From The Dangerous

Charging reading fees. Some so-called “literary agents” require reading fees from all writers who submit. We’ll put it this way: reading fees are bad, bad, bad. Reputable literary agents make their money by selling books, not by charging to read your work. The verdict: RED FLAG.

Taking a long time to respond. Unfortunately, it’s not unusual for writers to have to sit tight and fret over delayed responses. Here’s how to nudge an agent about a submission or how to get more attention from one. The verdict: AWKWARD MOMENT.

Recommending revisions (with fees). Some literary agents will respond to manuscript requests with a note saying, “We like this, but you need to revise. Here is the name of a freelance editor” or, “Here are our critique fees.” Sometimes, the advice is truly well intentioned. But other times, the agent is just looking to score an affiliate commission or business on the side. Do your research on literary agents’ reputations. The verdict: AWKWARD MOMENT that could be a RED FLAG.

Advertising. Most reputable literary agencies get more business than they can handle through the legitimate writers market listings that can be found on the Internet and in bookstores. The verdict: RED FLAG.

Targeting poetry and story authors. Be suspicious if any agent promises to make you a lot of money by selling your poems or stories to literary journals or magazines. The verdict: RED FLAG.

Withholding the names of editors who have seen your writing. You ask your literary agent for the names of the editors who have seen or will see your book project—and you’re told to back off. The question to ask is: Why is your agent withholding this vital information? Take a moment to assure him or her that you won’t contact editors on your own, then ask again. If the agent still doesn’t offer the names, it could be cause for concern. The verdict: AWKWARD MOMENT that could be a RED FLAG.

Not offering copies of editors’ responses. If you ask to see copies of responses to your submissions and your literary agent refuses to comply, you should be concerned. The agent could be misleading you about editor responses and whether submissions were made in the first place. That said, some agents just don’t like to share their personal correspondence. And other literary agents handle manuscript follow-ups on the phone, not in writing. The verdict: AWKWARD MOMENT that could be a RED FLAG.

Bundling. Some literary agents send more than one book project to a single editor at one time. As a result, the editor can feel as if the agent hasn’t really taken the time to learn which of that handful of books is the one the editor would be interested in publishing. The verdict: RED FLAG.

Asking you to sign a challenging literary agency contract. If your potential agent is willing to negotiate within reason, great (that’s what agents do!). But if your agent has refused to compromise, you might be looking at a difficult working relationship ahead. The verdict: AWKWARD MOMENT.

Should You Fire Your Literary Agent?

Sometimes, it’s hard to know when to break ties with a literary agent. If your literary agent is displaying any of these signs, it may be time to think about parting ways.

QUESTION: Of these 11 practices, which do you think is the worst?