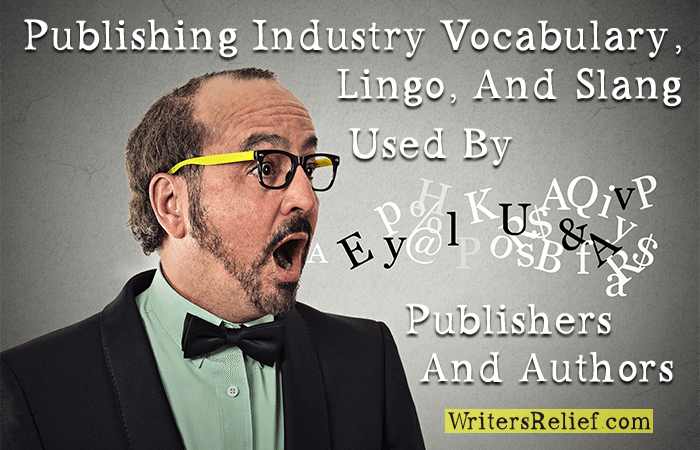 The slang terms, lingo, and jargon of the publishing industry can be confusing, especially to a new writer! But don’t worry—the team here at Writer’s Relief is ready to clear up any confusion. We’ve been helping writers make submissions and get published since 1994, so we’ve heard it all! Here are some basic—but important—book publishing vocabulary and literary journal terms you need to know:

Commonly Used (And Confused) Terms In The Publishing Business

Advance copies. Copies shipped by a publisher in advance of the publication date.

All rights. A vague grant of “all rights” essentially locks writers into an obligation that could tie up a work with a given publisher indefinitely. This is generally not acceptable language in publishing contracts.

Back of the room sales. Sales made by the author in person, when he or she is a guest or featured speaker.

Backlist. Books released prior to the latest publication.

Back orders. Book sales made prior to the publication date (pre-sales).

Book trailer. A short video promo to publicize a book.

Co-Edition (Co-Publishing).  When two different publishers release two different editions of a book at the same time (often pertains to translations, but sometimes can refer to physical and digital editions).

Co-Op Space. Negotiated (paid) book placement within bookstores in high-traffic areas (like the front of the store or on endcaps).

Copyright. The right to reproduce a given work (copyright can be licensed to a publisher as the right to print or copy).

Cover letters and query letters. A query letter is an introduction to a literary or book agent, and a cover letter is used when sending poetry and/or short stories to literary journals. (Writer’s Relief can help you write both!)

Delivery and Acceptance (D&A). When a manuscript is received and deemed publishable by a publisher, often after a contract has been signed and edits have been made.

Developmental editor. An editor who oversees or assists with the creation, packaging, and production of a book from start to finish.

Digital first publisher. A publisher that releases a book in digital form before deciding whether or not to create a physical edition.

Distributor. A company that distributes physical books to retailers.

DRM (digital rights management). Software that allows a book to appear in digital form and is meant to hinder online book pirating.

Earn out. An author who earns out makes enough money on royalties to cover his/her advance.

E-book. Electronic or digital book, usually read on a computer, phone, or e-reader.

Endorsement quote (blurb). Quote, often given from one author to another, for promotional use.

Exclusive read. If you grant an exclusive read (or right of first refusal) to a literary agent, you are granting him or her the right to read your book before any other agents see it. For more detailed information, see our article When A Literary Agent Requests An Exclusive: Solutions For Sticky Situations.

Front list. The most recently published titles in a publisher’s catalog.

Galleys. A galley is an unformatted version of a manuscript. Galleys are sent out to reviewers and blurb writers a few weeks before the book is put in stores in its final version.

Ghostwriter. A writer who works on a project but is not publically credited for that work.

Imprint. A subsidiary within a publishing house that focuses on a specific type of title.

Indemnity. Author’s agreement not to hold the publisher (financially) responsible for repercussions due to mistakes in the published book, such as plagiarism or failure to secure permissions to quote.

Literary agent. Professionals who can target your writing to publishers and make sure you get the best possible book deal.

Literary journal. A magazine that features creative writing selected by editors. Can be affiliated with a university or can be independent. Can appear in print or online or both.

Masthead. The masthead refers to the “behind the scenes” information about a publication, such as the editors, publishing information, etc.

Midlist. Authors who are not best sellers but who have a solid fan base.

Net amount. Amount made on the sale of a book after taxes or other expenses.

Net sales (sell through). The actual number of sales after deducting for returns.

Nonexclusivity. When a publisher acquires a nonexclusive right to publish.

Open market. The world market, apart from North America and The British Commonwealth.

Option. A kind of right-of-first-refusal that a publisher holds for the author’s next book.

Out of print. This term means different things to different publishers. Be careful! Termination clauses and reversion of rights often hinge on what’s considered “out of print.”

POD (print on demand). A publishing method that allows books to be printed one at a time.

Page proofs. Pages of a book as they will appear in the final production, often corrected by both an author and a proofreader.

Permissions. Allowances (often secured by the author) to quote other material.

Publicist (press agent).  A professional who works to generate buzz and publicity about a book: can work at a publishing house or work independently as a (paid) assistant to an author.

Query letters and cover letters. A query letter is an introduction to a literary or book agent, and a cover letter is used when sending poetry and/or short stories to literary journals. (Writer’s Relief can help you write both!)

Remainders. Physical copies of a book that do not sell are “remaindered”—sent back to the publisher for sale elsewhere, usually at a discount.

Reserves against returns. Since publishers often print more books than they expect to sell, they will often hold a portion of sales monies back from the author until returns have come in.

Reversion of rights. When all rights to publish revert back to the author, often due to a book becoming out of print.

Running head. Info at the top of a page in a book, like author’s name, title, and page number.

Self-publishing. Any form of book production in which the author assumes the financial risk.

Style sheet. A document prepared during copyediting that standardizes spellings (like character names) and other elements of text.

Termination clause. Agreement regarding terms of termination or nullification of a contract.

Trade paper. A paperback of a larger size than a mass market book.

Trade (mainstream, traditional) publishing. Traditional publishing model in which the author must find a literary agent and (often an advance-paying) publishing house editor.

Vanity press. A publisher that requires author to assume all financial risk (sometimes regarded as a pejorative term). “Self-publishing company” is preferred.

Virtual book tour. A series of promotional visits by the author to online venues, like blogs or online retailers. Also includes online advertising, contests, and other promotional efforts.

Warranty. An author’s promise against illegal actions taken during the writing of a book (like plagiarism and defamation). See also indemnity.

Wholesaler. Buys books in bulk at a deep discount, then sells those books to retailers at a less steep discount.

QUESTION: What publishing industry term do you think should be added to this list?