10 Books You Won’t Believe Were Once Banned 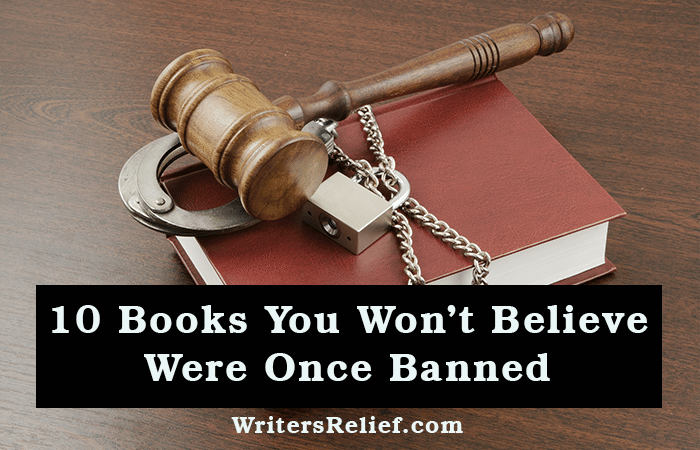 It may be hard to believe, but many books we now call classics and must-reads were once considered immoral and dangerous. Even today, there are still attempts to restrict or remove these books from school reading lists or libraries. The American Library Association works tirelessly to fight these challenges to our freedom of speech, and 2015 Banned Books Week (September 27 – October 3) will focus on the Young Adult genre, since these books are the most frequently challenged.

The Books They Don’t Want You To Read

1. The Grapes of Wrath by John Steinbeck, 1939. In this Pulitzer-Prize winning novel, Steinbeck described in stark detail how the Great Depression affected the rural poor. People were shocked by the vivid descriptions and the book was publicly banned in the US—and even burned.

2. A Streetcar Named Desire by Tennessee Williams, 1947. This play won the Pulitzer Prize for Drama in 1948, but its sexual content raised eyebrows. When the critically acclaimed film was made, many scenes had to be cut due to complaints about the immorality of the play.

3. The Catcher in the Rye by J.D. Salinger, 1951. Salinger’s book is still taught in many schools and embraced by teenagers who find the main character, Holden, very relatable. However, this book has a history of being removed from schools and libraries because some people consider it too obscene and negative.

4. To Kill a Mockingbird by Harper Lee, 1960. A Pulitzer Prize-winning novel that is deeply loved by many (if the backlash from Harper Lee’s recently released novel, Go Set a Watchman, is any indicator)—yet Lee’s take on racial injustice, language, and mentions of rape have resulted in the book being regularly challenged. It was removed from a high school library in Louisiana as recently as 1995.

5. Catch-22 by Joseph Heller, 1961. The satirical novel is often considered one of the greatest books of the twentieth century. But in 1972, a school board in Strongsville, Ohio, refused to allow the book to be taught in high school English classes and even removed the book from the library. The issue was finally resolved by a district court, which overturned the ban in 1976.

6. Beloved by Toni Morrison, 1987.  Beloved, written by one of the most influential African-American writers of our time, won a Pulitzer Prize and is assigned to countless high school English students. However, there are still calls for this book to be banned because of its violence, sexual content, and discussion of bestiality.

7. The Giver by Lois Lowry, 1993. This book about a Utopian future society is listed by the American Library Association as one of the most frequently challenged books of the 1990s. The most common objections have been over its violence and sexual scenes.

8. Harry Potter Series by J.K. Rowling, 1997–2007. The books in this incredibly popular series have been banned on a global scale. Most of the critics proclaim that the book promotes witchcraft. Extreme fundamentalist groups have gone so far as to demand burning of the books.

9. The Perks of Being a Wallflower by Stephen Chbosky, 1999. The endearing Charlie and his funny observations (and sometimes heartbreaking struggles) during his high school years often strike a chord with teenagers. But the explicit sexual content and portrayal of homosexuality have led to it being pulled off library shelves across the US. The Perks of Being a Wallflower is often found on the American Library Association’s most challenged books list.

10. The Kite Runner by Khaled Hosseini, 2003. This New York Times best seller tells a story of friendship and forgiveness, with Afghanistan as a backdrop. Yet there are still many parents and schools challenging the novel for its offensive language and sexually explicit content, leading it to be one of the top banned books.

QUESTION: What is your favorite book that is known to have been banned in American schools and libraries?

← Writerly Ways To Celebrate International Literacy Day My Word! The New 2015 OED Entries Are In! →