Classic Books You Can Read In Just One Day! 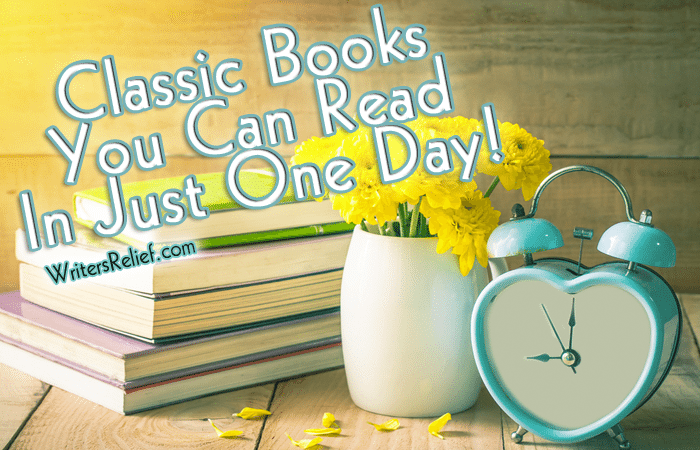 September 6 is National Read A Book Day! You can celebrate by starting a new book or continuing with a book you’re currently reading. Or you can be adventurous and try to read an entire book in just one day! Don’t worry, we’re not suggesting you attempt to read War and Peace in one sitting! But there are many classic books that are so concise you can finish reading them in a day. Browse your library, Kindle, or bookstore for these critically acclaimed, albeit short, novels:

The Metamorphosis – Feeling Kafkaesque? Try the classic about a man who wakes up to discover he’s transformed into an enormous bug. Kafka masterfully touches on the issues of isolation and alienation that plague his characters. At just about one hundred pages, The Metamorphosis is thick with complexity for such a short book.

Mrs. Dalloway – An excellent example of the stream-of-consciousness storytelling technique, Mrs. Dalloway chronicles a day in the life of Clarissa Dalloway as she grooms herself for a high-society party. Alternating from omniscience, inner monologue, and soliloquy, Virginia Woolf paints a portrait of Mrs. Dalloway from several characters’ points of view. It is arguably one of Woolf’s finest novels.

The Great Gatsby – If you haven’t read this Great American Novel, don’t fret! You can read it in one sitting. This classic story revolves around Jay Gatsby’s obsession with Daisy Buchanan and also explores the dark side of the American Dream—excess and social mayhem. Dismissed by critics at the time of its publication, The Great Gatsby has since become one of the twentieth century’s most notable novels.

The Ghost Writer – The first novel in Philip Roth’s Zuckerman Bound trilogy, The Ghost Writer tells the tale of Nathan Zuckerman—Philip Roth’s fictional alter ego. Spending a night in the house of a writer he idolizes, Zuckerman becomes fascinated with a woman named Amy Bellette, who he suspects is Anne Frank living anonymously in America. John Updike has said of Roth, “[He was] always one of the most intelligent and energetic of American writers…”

The Crying Of Lot 49 – In Thomas Pynchon’s quintessential model of postmodern fiction, Oedipa Maas discovers a long-running conflict between two mail distribution companies—one, the famous Thurn und Taxis, and the other, the secretive, underground Trystero. The Crying of Lot 49 is one of TIME’s 100 Best English-language novels of 1923–2005.

The Lover – Set in French colonial Vietnam, Marguerite Duras’s autobiographical novel follows the clandestine romance between a teenage girl from a poor French family and an older, affluent Chinese man. Winner of the 1984 Prix Goncourt in France, The Lover has been translated into over forty languages, and is considered a classic in the romance genre.

The Mezzanine – An example of a plotless book, The Mezzanine by Nicholson Baker journeys inside the mind of a man on his lunch break. His thoughts meander on the way to his conclusions—oftentimes in intricate, pointless detail. Baker’s use of footnotes, sometimes over half the page, is worth experiencing. If you’re a fan of stream-of-consciousness prose, this is a novel that can’t be missed.

QUESTION: What are some of your favorite short novels?

← Would You Be Happy If Your Publisher Did This To Your Characters? 14 Quotes From Famous Authors About The Work Of Writing →