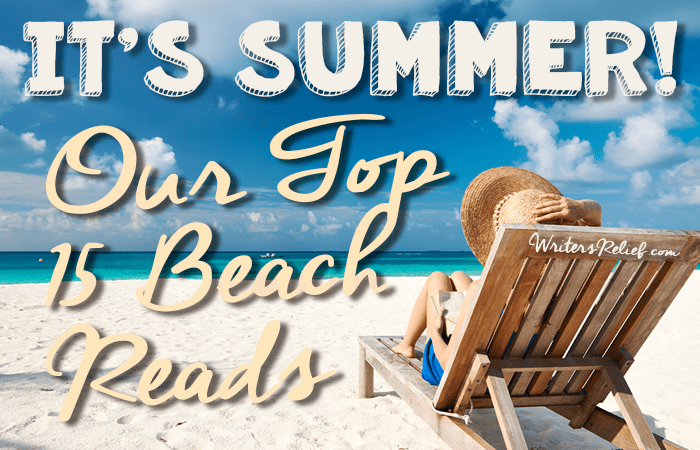 Summer’s here! You’ve long packed away your winter blankets and used up all your hot cocoa mixes—and have gladly replaced them with your beach umbrella and cold beverages.

And while you’re smoothing on sunscreen and grabbing your flip-flops, hit the beach with one of these fifteen hot reads.

A Certain Summer by Patricia Beard. In an idyllic Long Island shore town, Helen Wadsworth’s life is changed for good when her husband, Arthur, goes MIA during WWII. The only person who knows the details of Arthur’s disappearance is his best friend and partner on the mission, Frank. But Frank seems more interested in building a romantic relationship with Helen than answering questions.

The Beach by Alex Garland. An author often regarded as the voice of Generation X, Garland connected with the audience through his pop culture references and “understandable” writing. This story follows three young adults who search for a hidden paradise on an off-limits Thai island.

The Enchanted April by Elizabeth von Arnim. Two British women embark on a trip to sunny Italy to escape bad weather—and their unhappy marriages. Renting a medieval castle for April, they invite a frail elderly woman and a stunning beauty to join them and keep costs down. Despite the odd mix, they all learn valuable lessons from one another.

The Curious Incident of the Dog in the Night-Time by Mark Haddon. When a neighbor’s dog is killed, a brilliant but eccentric and emotionally disconnected young man sets out to find the culprit. Unable to handle the everyday social pressures of life, Christopher faces unique challenges that most people never experience.

Yes Please by Amy Poehler. If you loved Parks and Recreation—and the bubbly lady who performed Saturday Night Live sketches until the day before she was due to give birth—then this book is for you. Yes Please looks into the world of show biz and offers insights into Poehler as a director, producer, actress, and mother.

The Beautiful And The Damned by F. Scott Fitzgerald. A sumptuous, vivacious, and heartrending read, Fitzgerald’s classic recounts a marriage in an age of decadence and overconsumption. The protagonist slides into alcoholism as he struggles to find meaningful work. His wife, on the other hand, has a different idea of how to spend one’s time.

Nantucket Sisters by Nancy Thayer. When Piper meets Maggie on a beach in Nantucket, their friendship blossoms—even though Piper’s mother would rather she socialized with the wealthy daughters of prominent families. Over time, their friendship flourishes despite the odds; that is, until a hunky Wall Street trader walks into both of their lives—forcing them to choose between friendship and romance.

Sea Change by Karen White. Newly married Ava and Matthew set out to live in his ancestral home on an island off the coast of Georgia. But as time passes, so does Ava’s enchantment with her marriage. She slowly realizes how little she knows about Matthew. When she discovers her own family ties to the island, digging too deep may just shatter her future.

Summer House With Swimming Pool by Herman Koch. When celebrity Ralph Meier dies under the knife of Dr. Schlosser—the doc finds he has some high-profile cleaning up to do. But Schlosser can’t wipe away the summer vacation he once spent with his wife and two daughters at Meier’s summer home…or the terrible thing that happened there.

The Vacationers by Emma Straub. When a Manhattan family celebrates milestones with a trip to the Spanish island of Mallorca—things don’t go as planned. Past infidelity comes to light, and other secrets threaten to tear apart Franny and Jim’s 35-year marriage. Meanwhile, their body-building son drags along a personal trainer ten years his senior who seems lost in all their family conversations. Told with humorous affection, The Vacationers is ultimately a satisfying story of how one family weathers the storms in life.

As I Lay Dying by William Faulkner. A harrowing story told from the viewpoints of 15 characters, it focuses on the quest of a poor Mississippi family to bury their mother and wife, Addie. They ride out thunderous washouts, sleep in barns, and almost lose Addie’s coffin twice.

We Were Liars by E. Lockhart. Three daughters from a distinguished family bicker over their father’s inheritance. The next-generation kids, however, don’t have Grandpa’s money on their minds. When one of the younger ones loses her memory in a questionable accident, she returns to the island two years later to wrench the truth from her tight-lipped family.

Message in a Bottle by Nicholas Sparks. Don’t go a summer without a Sparks romance! In this story, we follow a journalist trying to find the author of a message in a bottle she found washed up on the beach. Fresh from a divorce, the wary Boston writer discovers the letter’s author—and the person he wrote to. Will their enduring hope for love bring them together?

Speak by Louisa Hall. Hall explores artificial intelligence and its role in filling the void of human contact. She compares five characters spanning centuries—and how their unfulfilling relationships and old grievances leave them wanting to be heard and understood—by someone.

To the Lighthouse by Virginia Woolf. A classic stream-of-consciousness novel—Woolf puts philosophy before plot. To the Lighthouse tells the story of how life is dramatically altered for a family when the mother and two children pass away. The novel is a study on parental relationships, and is partially based on Woolf’s own experiences with her then late mother and grieving father.

QUESTION: Want to add your favorite summer read? Include it in the comments section below!