Should You Make Book Comparisons In Your Query Letter? 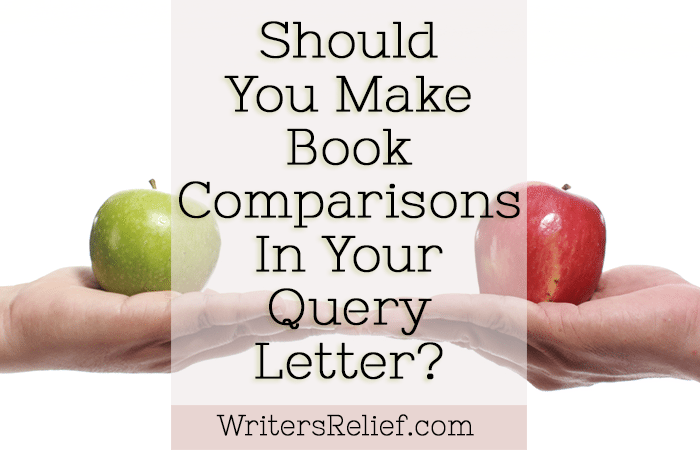 Query letter writing workshops will often advise you to mention comparable book titles in your letter to illustrate where your own book might fit within the publishing market. While it may be helpful for a literary agent to see the titles you feel are similar to your novel or memoir, there are also potential drawbacks.

Caution: Here’s Why Mom Said You Should Never Compare

Some writers compare their book to a well-known title. You know that book everybody’s reading right now? You can bet that the market is filled with query letters promising to be just like that book. But here’s the problem: That book’s already been written. And since so many query letters are already making comparisons to that popular book—your book could be shrugged off as another copycat.

Other writers compare to overly obscure titles. Tricky as it might be to compare your book to the most popular book on the New York Times list, it’s also potentially complicated to compare your work to a book that’s not well known. If the book you use for comparison doesn’t have good sales numbers, your effort might flop.

Many writers simply compare to the wrong titles. As an author, it can be hard to “see” your own book. So we’ve seen countless writers compare their books to titles that don’t quite match up. And that can weaken your branding and positioning.

Or writers “cross” books that don’t seem to mesh. By mentioning two titles that are very different, writers may hope to entice an agent into considering a new idea based on formulas that already work: It’s like THE DA VINCI CODE meets GONE WITH THE WIND! It’s like LOST meets A MILLION LITTLE PIECES. It’s like THE SEVEN HABITS OF HIGHLY EFFECTIVE PEOPLE meets RICH DAD, POOR DAD! We’ve seen this angle backfire many times because, often, the crossed titles are more confusing rather than clarifying.

Keep in mind: You may compare your book to a book the agent hates. Let’s say Agent A reads only a book blurb, loves the idea, and asks for sample pages. Meanwhile, Agent B has exactly the same taste as Agent A, reads the same book blurb, but also reads that the author has compared the story to a book the agent dislikes. That’s a missed opportunity—especially if the comparison wasn’t really a good one to begin with!

What about comparing titles for nonfiction? If you compare nonfiction books, know that you’re up against the same odds as a writer who compares fiction.

That said, the “comparing game” changes a bit when we move into the realm of prescriptive nonfiction or popular nonfiction. If your nonfiction book is in a field that is saturated, you may want to point to other titles to demonstrate how your book is different than what’s already out there. Otherwise, it may not be obvious to an agent why your book called How to Grow a Garden is different than any other garden books on the shelves.

How To Effectively Compare Book Titles In Your Query

Let’s be clear: We’re not saying you shouldn’t ever compare. Book comparisons can be helpful to agents. Literary agents like to see that writers are intimately familiar with their book genres. And well-done comparisons allow an agent to quickly get a sense of what the submitted book might be like.

What to do before you include a book comparison in your query:

Writing your own query letter may seem daunting, but the experts at Writer’s Relief can help! For our Full Service clients, our professional letter writing team creates effective query letters that are skillfully crafted to entice literary agents and build interest in their books.  If you’re a DIY-type, you’ll find an easy-to-follow, step-by-step blueprint for writing a successful query letter using proven marketing techniques in our book, The Ultimate Query Letter Tool Kit by Writer’s Relief.

QUESTION: Do you think book comparisons are helpful? What book(s) does your book compare to?