Writers: Is Your Book Ready For Hollywood? 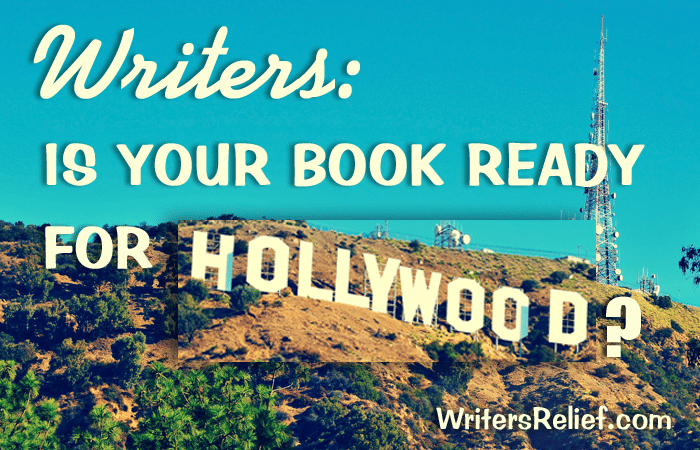 You’ve written a book with great characters, memorable dialogue, and an engaging plot. In fact, readers enjoy your book so much, they keep telling you what a fantastic movie it would make! But you’re wondering: Just because it’s a good story in book form, would it make a good script for a film?

We’ve put together a quick quiz to help you determine if your book could make a good screenplay for mainstream audiences. To appeal to mainstream moviegoers, Hollywood producers look for very specific elements before they will option the rights to your story.

On the other hand, independent filmmakers are usually more flexible and will take on unusual stories. So if you read the following questions in our quiz and think, Nope, that’s not my book—don’t give up on a movie deal just yet. Your story might resonate with an indie film audience instead.

Quiz: Would Your Book’s Story Make A Good Hollywood Movie?

Is the action significantly external with an emphasis on viewable action? Often what readers say they love most about a book is being able to live inside a character’s head. It’s also what they say they miss most when a book is turned into a movie. If the forward action of your story happens mostly in your characters’ minds and doesn’t show up in their larger-than-life actions, you might have a great book—but not necessarily a Hollywood blockbuster movie. Will the action of your story be fun to watch?

Does your story follow a traditional cinematic structure? Author Blake Snyder’s story template, laid out in his book Save the Cat, offers a traditional account of a hero’s journey that many producers swear by. To know if your book could make a good movie, study Hollywood story structure. Not all big releases follow the format, but many do. And Snyder’s story structure has become so pervasive, some critics think it’s curtailing creativity in Hollywood.

Does your book already have a mega-huge readership? If your book is not already selling like gangbusters to book readers (the audience it was intended for), Hollywood executives won’t be easily convinced your story will sell to moviegoers (an audience it wasn’t intended for). So the bigger your book sales, the better your shot at a film option.

Is your book based on a true story or inspired by true events? Readers and film audiences love larger-than-life stories that are also true. Bonus points if your story introduces an obscure narrative that’s framed by a larger, popular subject. For example: The astonishing true story of a little-known hero who did something unexpectedly courageous in a very well-known battle of World War II. If you’ve got a story like that, you might be looking at a film that’s Oscar bait.

Is your movie genre crystal clear? Your book should fit nicely in an existing Hollywood genre. With a little Internet research, you can create a list of upcoming movies and their genres. Does your book fit into any of these popular movie genres? Can studio executives pinpoint your target audience? And how wide is your audience? Is it limited to middle-aged women, or is it a four-quadrant film?

Will your story appeal to overseas audiences? More and more American movies are being made for global markets. If your story has overseas appeal, it can be a hot commodity for the film industry.

A Word About Exceptions

As with writing stories, novels, and memoirs, there are no rules about what will work and what won’t on the big screen. Studio executives are often surprised by what appeals to audiences and what doesn’t. Short stories that eschew traditional plot structure can be retooled to become blockbusters. And cerebral novels in which nothing blows up and nobody saves anybody’s cat can become wild hits.

So while every book isn’t destined to become a best seller at the movie box office…who knows? One of the books that does make it may be yours!

QUESTION: What was the last book-to-movie film you saw? Did the adaptation work?

← Celebrating Jewish-American Writers ProofNEEDing: It's not me, its you →