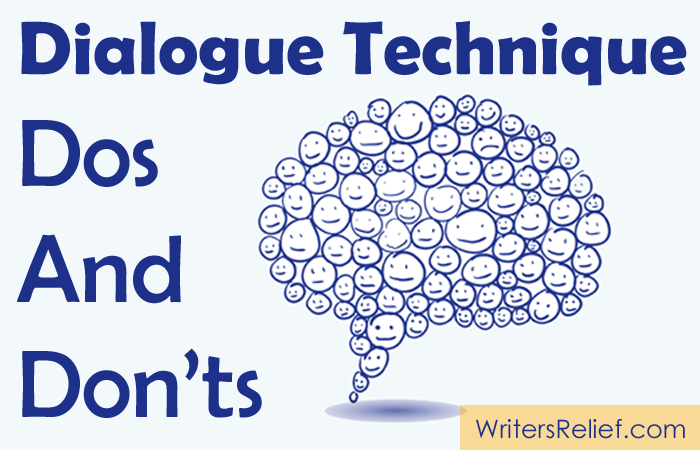 When writing dialogue for stories or novels, you would think it’d be easy to talk the talk. But writing strong dialogue between characters requires knowing how to use specific craft techniques effectively—and knowing which grammar mistakes to avoid!

Mimic the cadences of natural speech, but only to a point. For example: If writers actually wrote, um, like people talked—you know, in real life—then readers would have to, like, stumble through dialogue because of all the annoying, gosh, pauses, and stuff that happen in lots of real-life conversations.

Control the flow. Every time a character interrupts a conversation to explore a thought or make an observation, the pacing slows down. Sometimes that’s a good thing—just be careful you don’t lose the reader’s attention. Be sure to remove any unnecessary conversation interruptions.

Keep speeches short. Unless your character has a really good reason for talking for a long time, and he or she is genuinely charismatic and compelling, resist the urge to write lines of dialogue longer than a few sentences.

Give each speaker a subtly unique voice. Characters who are truly developed in the writers’ mind will often have their own subtle patterns of speech and diction. That doesn’t mean every character needs an excessively distinct style. It just means each character should be fully developed.

If you need to get emotional, put the words in your character’s mouth. Readers love when characters make big confessions or give voice to their epiphanies. It helps us to inhabit the moment with them.

And 7 Common Errors That Will Kill Your Dialogue Fast

Adverbs. If a line is truly evocative of the underlying emotion, then an adverb isn’t necessary. “Oh, how I hate my life,” she said gloomily.

Any word but “said” as a dialogue tag. Along with using excessive adverbs, new writers also tend to use words other than “said” in their tags. “I hate my life,” she moaned. Or “I didn’t know you were coming,” he giggled. First, a person can’t “giggle” or “moan” a sentence. A giggle is one thing. A moan is another. Characters speak sentences; hence, “said.” You might occasionally get away with words like “whispered” or “cried.” But take care.

Using “said” too much. The other side of the “said” coin is using it over and over. Readers should be able to tell which character is speaking without every single line being tagged with “Mary said” or “Shawn said.”

Dialect. With some exceptions (David Mitchell’s Cloud Atlas, anyone?) heavy-handed dialect is passé. When imitating natural speech, make as few changes as possible to reflect your speaker’s diction. “Ah am go-eeng to zee cin-ee-mah” is far more irritating to read than “I am going to zee cinema”—but both versions get the inflection across.

Cartoony language. If you’re writing a character who may come off as a stereotype, be careful not to choose words that resonate as trite, generic, or cliché. Not all surfers say “dude” after every sentence. Write well-developed characters.

Repeatedly using character names. New writers often have their characters calling each other by name multiple times during a single conversation, even when they’re the only people in the room. Unless characters have a meaningful reason to use first names to grab attention—“Jack! Look out for the falling piano!”—avoid it.

Thinking aloud when alone. If your character is often talking to himself or herself, you could be looking at a symptom of poor plotting. “If you are inclined to leave your character solitary for any considerable length of time, better question yourself. Fiction is association, not withdrawal.” —A. B. Guthrie

QUESTION: What have we missed? Leave your dialogue tips and pet peeves in our comments section!