8 Lessons For Writers From Rudolph The Red-Nosed Reindeer 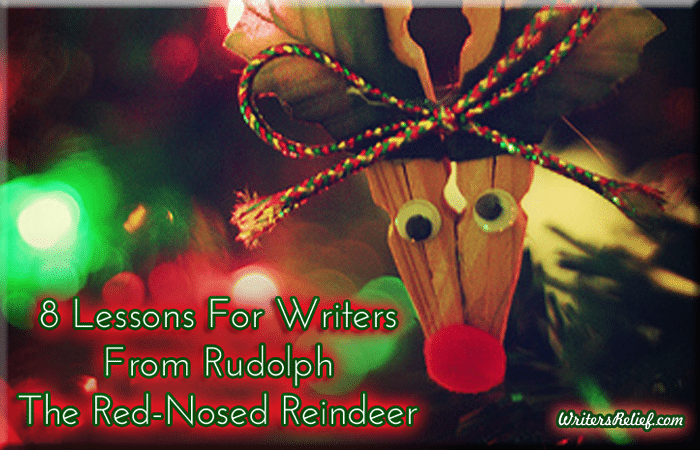 It’s the most wonderful time of the year! When all of your favorite holiday TV specials are back: A Christmas Carol, A Charlie Brown Christmas, Frosty the Snowman, and more. One of the longest-running holiday specials, first aired in 1964, is the stop-motion animation film Rudolph the Red-Nosed Reindeer. The story of “misfit makes good,” Rudolph offers life lessons for young and old—and especially for writers!

Here are 8 lessons for writers from Rudolph the Red-Nosed Reindeer:

The Classics Are Classic For A Reason. First introduced in a 1939 booklet, Rudolph gained worldwide fame when Gene Autry‘s recording of the song Rudolph the Red-Nosed Reindeer was released in 1949. Autry’s version has been played every holiday season since and is one of the top-20 singles of all time.

As a long-running TV special and best-selling song, Rudolph the Red-Nosed Reindeer is a time-tested classic. What can Rudolph teach writers about crafting a story with staying power? Take a relatable underdog, add some loyal friends, throw in a scary nemesis, have the underdog win, teach a moral, and have a happy ending—but write it in a way that’s not cliché and has a twist. Remember, before Rudolph was created, Santa only had eight reindeer—all with ordinary, boring noses.

It’s Okay To Be Different. Poor Rudolph! Born with a bright red nose, he was different from the rest: A misfit shunned by all of the other reindeer, who used to laugh and call him names. But in the end, it’s what makes him different that saves the day.

The lesson? We all have traits and peculiarities that set us apart from others. Never feel forced to conform. Chances are, what makes you different is what will make you stand out.

Find Your Niche. Rudolph wandered aimlessly through life until one foggy Christmas Eve Santa came to say, “Rudolph with your nose so bright, won’t you guide my sleigh tonight.” And then—ta-da!—Rudolph’s role in life was revealed.

At first Rudolph was floundering, searching for his purpose. You, too, must find the writer’s voice that is uniquely yours. The journey’s rarely an easy one, but the rewards last a lifetime.

Team Up With Others. In the 1964 TV special, Rudolph teamed up with Hermey, an elf who dreamed of being a dentist rather than a toy maker. Together, they found ways to overcome the trials that lay ahead.

Writers can also benefit from the support of others traveling a similar path. Joining a writers group can be a great way to build up your confidence and courage to face the perils of the writing life.

Endure Rejection. Rudolph drifted from place to place, rejected at every turn. As a writer, odds are you know what that feels like.

How many times have you heard “no”? How often have you thought, How much longer can I do this? Like Rudolph, you have to fortify yourself and keep pushing forward.

Pursue Your Dreams. Hermey was supposed to accept his fate as a toy maker. What elf doesn’t love making toys? But Hermey wanted to be a dentist, so he focused on achieving his goal—and saved his friends—by extracting the Abominable Snow Monster’s teeth.

Writers: Be like Hermey. Don’t do what others expect you to do—do what YOU want to do. Be who you want to be, whether it’s a writer or a dentist (or even a dentist who’s a writer!).

Win Over Your Critics. Rudolph, Hermey, and Yukon Cornelius (remember Yukon, the upbeat prospector?) took all the bite out of the Abominable Snow Monster. Their former nemesis was kinder, gentler, and no longer a threat.

By honing your writing skills, your work will mature, your voice will become clear—and editors, agents, and readers will notice. You can win over your critics!

Be Proud Of Your Work. When Rudolph finally flew off into the Christmas Eve sky leading all of the other reindeer, his nose wasn’t the only thing beaming. His whole being was clearly aglow with pride in his newfound role.

Likewise, when you write something you know is good, let yourself bask in the joy of your accomplishment. Give yourself a pat on the back—maybe even shout it out with glee!

The misfit Rudolph was different from the other reindeer. But that difference became his claim to fame. So what do you do with what makes you different? Hide it? Change it? Hmmmm…not good ideas. Accept it? Embrace it? Now you’re talking! Flaunt it? Yes! And like Rudolph, maybe you’ll go down in history!

QUESTION: What other writer lessons can be learned from Rudolph the Red-Nosed Reindeer?