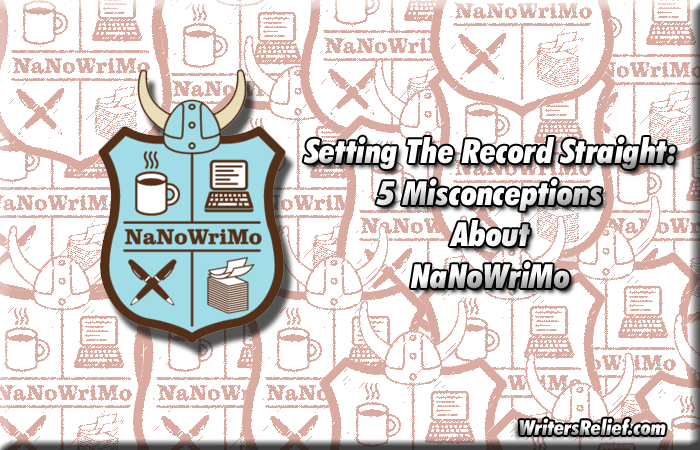 November brings us cooler weather, turkey dinners, and—most importantly—National Novel Writing Month! Since 1999, NaNoWriMo has been challenging writers to write “a book in a month.” This annual literary event has grown from 21 participants in its first year to over 310,000 writers in 2013. But not everything writers believe about NaNoWriMo is true. We’re here to set the record straight about some of the misconceptions surrounding National Novel Writing Month.

The goal of NaNoWriMo is to complete an entire book in a month. While some writers might expect to have a finished book in thirty days, most writers understand that their NaNoWriMo efforts will result in the finished raw material of a book—not a polished, publisher-ready book. NaNo is just the beginning; after the initial thirty-day writing frenzy, participants often spend months in very deep revisions. Learn more about How To Prepare Your NaNoWriMo Book For Publication.

All NaNoWriMo books are a waste of time and paper. Some people assume the only way to write a book in a month is to write a crappy book. While there certainly are NaNo books that reek of “eau de first draft,” there are also those that are surprisingly brilliant. Many writers find that working under intense pressure brings out the best in them.

NaNoWriMo is for amateurs, not “serious” writers. Yes, the majority of NaNo participants are aspiring authors. But there are many writers with publishing credits and advanced degrees among the ranks! And NaNo writers have been published by major publishing houses, including Simon & Schuster, Ballantine, Dutton, HarperCollins, Berkley, and more. Find a list of published NaNo writers here.

Agents do (or don’t) want to know that you wrote your book during National Novel Writing Month. Whichever way you read that sentence—it’s just not true. Most agents don’t care if you started your book during NaNoWriMo or if you wrote it during the other eleven months of the year; what matters is the strength of your writing.

NaNoWriMo participants must become hermits and spend hours cut off from the world. Not necessarily true! Many writers join NaNo because they want to connect with other writers. The National Novel Writing Month coordinators have created a wonderful website with forums where writers can connect, commiserate, share advice, and support one another. While you can choose to work alone, there’s certainly no need to! Most writers report that participation in NaNo is fun.

To learn more about succeeding as a NaNo writer, check out our article: NaNoWriMo: 7 Steps To Set Yourself Up For Success.

QUESTION: Have you ever participated in NaNoWriMo? If so, would you do it again?