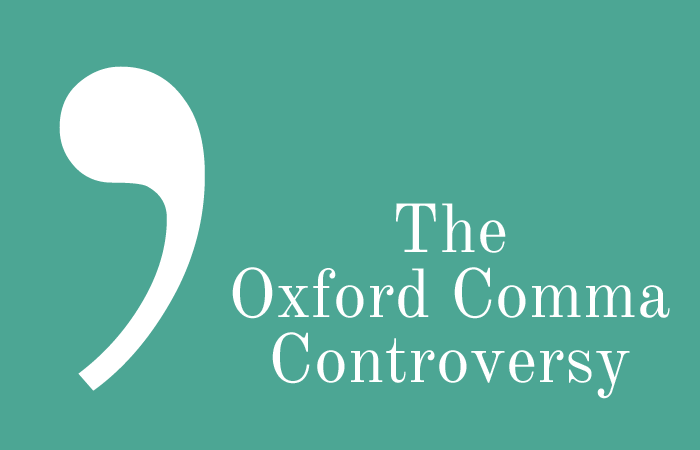 Of all the marks used for punctuation, none seems as divisive, controversial, or maligned as the Oxford comma. For all its many ardent supporters, the Oxford comma has almost as many zealous opponents insisting that it be stricken from the page. Put together a group of well-mannered, grammatically gifted writers, mention the Oxford comma, and watch the syntax hit the fan.

A Comma By Any Other Name…

The Oxford comma is so named because it is the house style used by the editors and printers of the Oxford University Press. It is also known as the “serial comma” and the “Harvard comma” since it’s also the preferred style of Harvard University Press. This is the comma used in a sentence before the coordinating conjunction (and, or, nor) at the end of a list of three or more items.

In American English, most style guides recommend using the Oxford comma. So where does the controversy come from? In an effort to save space and pack in more news per square inch, the Associated Press and journalistic style guidelines advise against using the serial comma. (Seriously, how much space are you saving by removing one little comma?)

Ironically and surprisingly enough, the Oxford comma is not used in Oxford University’s homeland, the United Kingdom—or in Canada or Australia.

When a sentence includes a series of people, places, or things, using the Oxford comma makes it clear just how many items you are listing and resolves any potential confusion or ambiguity. Also, without the Oxford comma, you may inadvertently suggest a connection between the last two items that does not actually exist.

Example: I owe my success to my parents, the president and the vice president.

To eliminate any misunderstanding about your parentage, the sentence should be written as: I owe my success to my parents, the president, and the vice president.

Another example: The elephants, Winston Churchill and King George boarded the train.

Well, what do we have here: two elephants with very pretentious monikers; or a pair of pachyderms and two respected British gentlemen? Perhaps England should not be so quick to dismiss the value of the Oxford comma!

Keep in mind that if the last element in a sentence is a pair joined by and, you should use an Oxford comma before the coordinating conjunction that precedes the pair.

An example with pears…and a pair: My favorite breakfast is fresh pears, pancakes, syrup, and bacon and eggs.

Without the Oxford comma, you would end up with syrup all over your bacon and eggs.

Since it always makes sense to make sense when you’re writing—don’t hesitate to use the Oxford comma!

For more comma information, check out our related articles:

How To Use Commas After Introductory Phrases

QUESTION: Are you for or against using the Oxford comma?

← The Literary Agent Of The Future: Be Aware Of These Potential Changes! 8 Techniques To Up The Drama Factor In Your Short Stories →