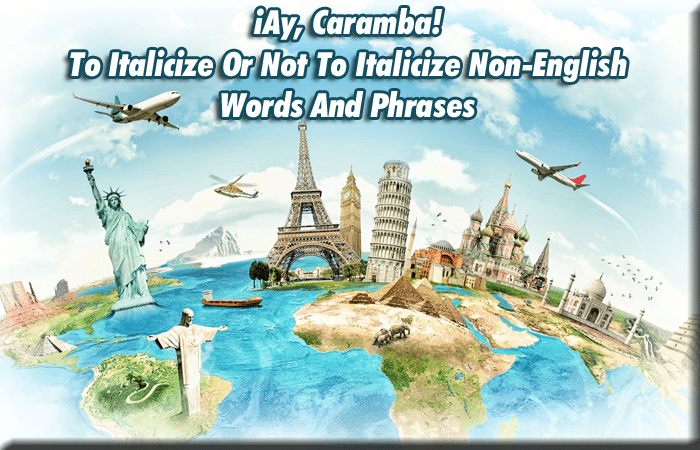 As writers, we all want our work to have that special je ne sais quoi…or is it je ne sais quoi? How do you know when to italicize a foreign phrase in your writing? Unlike conjugating verbs in Japanese, the answer is easier than you might think.

Single words or short phrases in languages other than English should always be italicized if considered unfamiliar to the reader:

Example: Eduard gave his babička a big hug at the Christmas party, after having not seen her for two years.

Example: “Bonjour, mes amis,” the French teacher greeted the students as they entered the classroom.

If the word or phrase will be used repeatedly, only the first occurrence needs to be italicized.

But should you ever NOT italicize a foreign phrase? Si, oui, and hai. In keeping with the general rules for italicization, if the non-English word or phrase appears in an already-italicized passage (such as an internal thought), the non-English portion should not be italicized..

Example: I can’t wait to see my babička next weekend, Eduard thought to himself.

If the non-English phrase makes up a complete sentence, or if the passage contains two or more sentences, set it in non-italic and use quotation marks.

Does the need to italicize a foreign word continue ad infinitum? Nope. Some words, although technically not English, are so commonly used that they have become part of the English dictionary. If the foreign word or phrase you are using might possibly fall into this category, check one of the major dictionaries (the OED, Merriam-Webster Inc., etc.). If it’s in the dictionary, you do not need to italicize the word(s).

Example: “Bravo!” the conductor exclaimed as the trumpeter finished her perfectly executed solo.

Example: The professor’s lesson was so disorganized, the students were convinced he was meshuggah.

And that’s it! Follow these simple rules for italicizing (or not italicizing) foreign words or phrases, and you’ll always be on terra firma. If you still have questions, the Writer’s Relief proofreaders are always here to help!

QUESTION: What foreign words do you use frequently in your writing?

← Stress-Free Mingling Strategies And Conversation Starters For Writers At Conferences The Money-Saving Guide To Writing Conferences: Save Hundreds Of Dollars With These 20 Tips →