The “Blond Or Blonde” And “Gray Or Grey” Debates 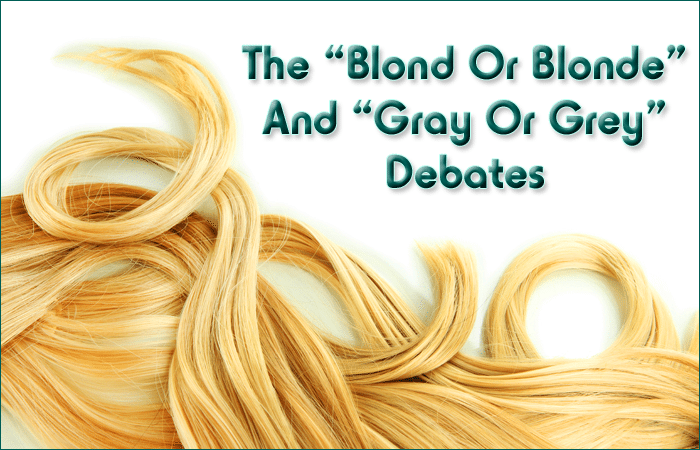 Is your main character a blond…or a blonde? Or that grandfatherly antagonist you just created—is his thinning hair iron gray or iron grey? Stop tearing your hair out trying to decide! We have the answers right here.

The word “blond” has its origins in French, where it has both masculine and feminine forms (blond and blonde, respectively). In English, the word follows these gender rules when used as a noun.

Example: Jim would definitely look better as a blond than as a brunet.

Example: The blonde across the street got into her car and went to the store.

For French and British writers, “blond” also remains gender specific when used as an adjective. Around the 1970s, however, it became standard practice in American English to default to “blond,” regardless of whether the person or object being described is masculine or feminine.

Example: The girl wore her blond hair in pigtails.

Example: The blond boy’s hair looked bleached in the summertime.

Example: She baked a blond sheet cake for her friend’s birthday.

Of course, it wouldn’t necessarily be incorrect to use “blonde” as a feminine adjective; our goal is to describe common usage. As with any other grammatical rule, the most important thing is to be consistent throughout your work, whichever adjective spelling you choose to use.

Fortunately, the rule for using “gray” versus “grey” is more clear cut.

Both spellings are correct, but in American English, “gray” is always spelled with an “a,” regardless of part of speech. “Grey” is the British spelling used throughout the United Kingdom.

Example: Her eyes were a light shade of gray.

Example: His hair has grayed over the decades.

It’s as simple as that!

We hope the examples and explanations provided here will help you fine-tune your writing style.

QUESTION: What words do you have trouble choosing the correct spelling for?