Should You Fire Your Literary Agent? The 10 Signs That It’s Time To Say Good-bye 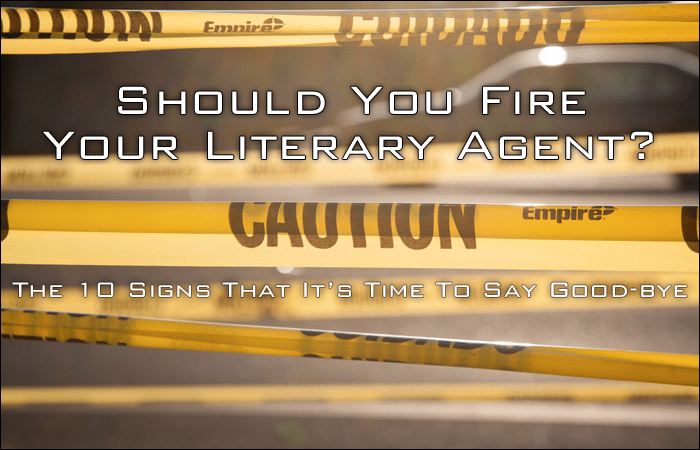 It’s not easy to make the decision to leave your literary agency. No writer wants to fire a literary agent. Usually, literary agents and writers enter into their partnership with lots of enthusiasm and optimism. Most writers would rather try to work out any problems with their current agent than start the entire process of finding literary agent representation all over again.

That said, sometimes the signs point toward firing a literary agent. If you’ve been on the fence about whether to stay with your literary agent or say good-bye, this article will help you decide.

How Do You Know When To Fire Your Literary Agent?

Here are some signs that it might be time to look for a new agent.

Cut Your Losses: What Do You Stand To Gain Or Lose If You Fire Your Agent?

If you fire a bad literary agent, there’s always the chance that a better literary agent might be just around the corner. However, if you do terminate a relationship with an agent, you may need to explain the situation at some point.

It’s like quitting a job. When you leave one position and interview for another, your potential employer will want to know why you left. Keep the conversation positive—say that you were eager to connect with a literary agent who had more time to dedicate to your book.

You will also need to make a decision about whether or not to mention your prior literary agency in your new query letters. Some writers prefer not to mention having fired their prior literary agent in their initial query letter, preferring instead to bring up that topic only after another literary agent has shown some initial interest in the manuscript. This way, the writer doesn’t have to fumble through explaining what might be a very complex situation in just a few sentences in a query.

Just know that if you fire your literary agent, you may need to explain your choice when querying agents.

Breaking Up Is Hard To Do

As a writer, you must stand up for your own writing and not rely on anyone else to do it for you. If that means you need to fire a literary agent who is not treating your work with the respect it deserves, then don’t feel bad about your decision to part ways.

Be sure to check back for our upcoming article: How To Fire Your Literary Agent.

QUESTION: Have you ever wanted to fire your literary agent?

← Writing: The Super-Secret Super-Vitamin for Adults AND Kids Interview With An Author: Jennifer Finney Boylan →