Interview With An Author: Ginnah Howard

Ginnah Howard’s stories have appeared in Water~Stone Review, Permafrost, Portland Review, Descant 145, Eleven Eleven Journal, Stone Canoe, and elsewhere. Several have been nominated for a Pushcart Prize. Her novel, Night Navigation (Houghton Mifflin Harcourt 2009), was a New York Times Book Review Editors’ Choice. The National Alliance on Mental Illness of New York State gave Howard their Media Award for work on behalf of those with mental illness and their families. Her new novel, Doing Time Outside, a stand-alone sequel to Night Navigation, was published by Standing Stone Books in August 2013. The third novel of the trilogy about two upstate families, Rope & Bone, will be published in the summer of 2014.

CONTEST: Leave a comment or a question for Ginnah below by January 15 and you’ll be entered to win a copy of her books, Doing Time Outside and Night Navigation! U.S. residents only. This contest is now closed. Congratulations to our winner Erika Armstrong! Thank you to all who participated!

How did you get your literary agent?

Getting an agent was more of a marathon than a sprint. Though I had always loved to read and had been thrilled as a child by the highly rhythmic poems in the Books of Knowledge such as “Little Orphan Annie” and “The Cremation of Sam McGee,” I did not consider doing creative writing until I was in my late forties. After I had thrown away hundreds of pages of bad stuff, I began to learn how to “show” rather than “tell.” At that point I finally wrote a couple of stories that “worked,” about two upstate women who were struggling to raise their kids and get their cars started on subzero mornings. I took those stories, those characters, to a month-long writers’ conference facilitated by Russell Banks. He said, “I love these women. Go home and write at least twelve more about these families to make a collection, and then I’ll give you a recommendation to my editor and agent. I did that and Banks fulfilled his promise. I received encouraging rejections, but it was clear that the work was not yet ready. Over the next ten years, I added more stories, fifteen of which were published in literary magazines. I continued to send out queries to agencies, often with recommendations from well-known writers who were facilitators of other conference workshops I attended. Finally, in 2005, Alice Tasman of Jean V. Naggar Literary Agency agreed to represent me.Though she was not able to sell the novel-in-stories at that time, she did find an enthusiastic editor with Houghton Mifflin Harcourt that published my next novel, Night Navigation. And Alice’s chutzpah, also gained me a substantial advance.

Until I watched my 142,000 word manuscript go through the process of becoming a book of 97,000 words, I knew almost nothing about publishing. Many advantages come to a writer whose work is published by a major house. By major, I mean that besides the prestige of being backed by a big name, so many more services and promotional opportunities are available: All the editing, copy-editing, and formatting is taken care of, hundreds of pre-publication review copies are sent to the media, with free books given to readers through sites like BookBrowse and Amazon Vine. The in-house publicist sent copies, often with personal notes, to places I suggested such as radio interviewers and college departments that fit the novel’s “niche.” My book was given a page in a beautiful catalog that a Houghton Mifflin Harcourt sales representative took around to all the major bookstores, so that these chains ordered a box of Night Navigation pre-release. All of this created a buzz and made it more likely the novel would get a review in the New York Times—which it did.

Since I was not a famous author who’d be given a book tour, I was expected to do my part in marketing as well. I scheduled seventy-five “events” that followed the hardback publication and the paperback release one year later: library, bookstore, and conference readings; college visiting writer “gigs”; radio interviews; joining book clubs for their discussion of the novel in person or by speakerphone, etc. Some online marketing. All of which, though intense, I enjoyed. That was my experience with the business of publishing with a major house.

And what were the biggest stumbling blocks that you had to overcome?

Though I believe my second published novel, Doing Time Outside, is as good a book as Night Navigation, my agent was not able to sell it to one of the big publishers. Speculations on reasons for this might be the subject for a different interview. Instead, Doing Time Outside was published by a small press. And here’s the reality of many small presses (or self-publishing) vs. major: Almost none of the promotion done by Houghton Mifflin Harcourt is going to be available.The good thing is that I knew this ahead of time: The lion’s share of all the marketing would be my responsibility.

I’d say that the biggest stumbling blocks have been that it’s difficult to get your small-press novel reviewed, and since no sales rep has promoted your book, stores will not have ordered a box of them, and likely the print run will not have been large enough for that anyway. There’s no chance to be in the Times.

As a writer who did not grow up with the Internet, I’m still something of a novice in making full use of social media, but I do see it as an important marketing strategy—especially if your book is released by a small press or you are self-publishing. If your book is good and has some sort of niche that you can market to and you can devote much of your life to promoting for a year using a wide range of “tools,” slowly, slowly your book may gain momentum. You will send your thirty free author copies out to likely media and venues. You will have a great website and pages on Amazon, Facebook, Goodreads, and BookBrowse. (And if you’re much more tech-savvy than I am, you’ll be on Twitter, Tumblr, Pinterest…) Every time you do a reading or have an interview or get a review, you will post those announcements and links on all the sites I just mentioned. You will send emails announcing each stage of your book’s emergence to the 400 people in your address book that you’ve been truly connecting with over the years and hope they won’t begin to dread your literary barrage. You will be sending these emails through a Web service that permits such blasts, 100 at a time, 1,000 an hour. You will put up fliers geared to book clubs in all the Laundromats and malls, offering details about your book and saying that you are available to join their discussion if they select your novel. You can send that same flier to dozens of public library book clubs saying you will join their discussion via telephone or Skype if they aren’t within driving distance. You will send postal mail to your niche because those strangers will not bother reading your unknown sender invasions. And of course you can blog.

My best piece of advice for getting your work published:

Do not focus on publishing. Sit down daily to write and rewrite and revise again after you’ve read the stuff to a good critique group. Remember that though there will be days when you dread facing that blank screen, always there will be the thrill of the unexpected coming to you out of nowhere. The joy of making the world on the page is your real ADVANCE. And because you have written a book worthy of readers, you are willing to spend hundreds of hours to maybe sell a thousand copies.

We’re happy to promote Ginnah’s book Doing Time Outside. Compelling, tough, and funny, Doing Time Outside travels the back roads of family life to better understand what it means to be tied by blood and love to the world of mental illness, addiction, and incarceration. 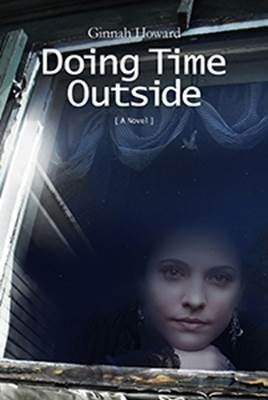 “Ginnah Howard guides us through a gritty America caught between a small-town bar, a church, and a jail cell. Through compassion for her characters and the buoyancy of her voice, Howard gives us a novel with a generous and intelligent heart.” —Mermer Blakeslee, author of When You Live by a River

From CHRONOGRAM (excerpt)
Catskill’s wordsmith Howard has a gift for the choice, mundane detail: the vinegar chips and Advil headaches and warmth of a dog’s fur on a cold day. Her turf is the Upstate New York just outside of the weekender realm, and her people are fiercely smart and loving throughout their frustrations and misunderstandings. You start really, really wanting Rudy to make it, a topic around which Howard builds mind-bending suspense.
It all comes together in a knockout ending—Howard’s characters have grown and so have we. A beautiful read.

“Howard is a writer to watch.” ─WASHINGTON TIMES
“Howard is a graceful, spare, and fluid writer.” ─PUBLISHERS WEEKLY

Also, you can view reader reviews of Doing Time Outside on Amazon, and her interview with Off the Page.

CONTEST: Remember to leave a comment or a question for Ginnah below by January 15 and you’ll be entered to win a copy of her books, Doing Time Outside and Night Navigation! U.S. residents only. This contest is now closed.