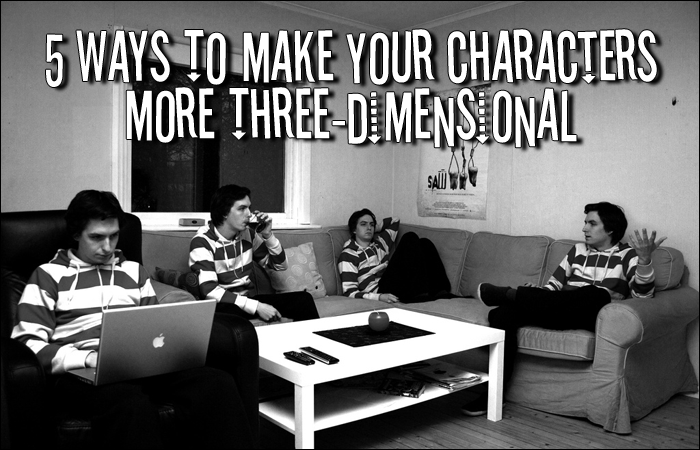 No matter how interesting or innovative your writing might be, a story without three-dimensional characters can quickly fall flat. There are many techniques you can use to add that extra spark to your characters and give them unique qualities that will set them apart from the rest.

1. Allow for “out of character” characterization.

Don’t limit your characters to a certain set of behaviors so that your shy character is ALWAYS shy, or your outspoken character is ALWAYS loud. Instead, be open to unexpected character traits. Maybe your straitlaced protagonist dances on tables when he has a few drinks. Or perhaps your bossy heroine gets tongue-tied around her mother. What makes people (and characters) so interesting is how unexpected their behaviors or reactions can be. Ask yourself: Are your characters surprising you with their quirks?

2. Give them a sense of grace, destiny, or belief.

Allow your character to feel like he or she has a greater purpose in life. Most people search for truth and purpose in their own lives, so it is important to give your character a similar sensibility. For example, the woman who has just been fired from her job could find new employment in a field she’s never considered, and maybe this opportunity is just what she’s needed. From there, you can decide whether or not your character’s dreams or beliefs will benefit his or her inner growth and development. (Tip: You can tie this into the above method, so that your meek main character may follow his or her dreams of crime-fighting to take karate lessons and eventually become a ninja—hey, we did say “dreams”!)

Human beings are naturally conflicted in the emotions department. Why not translate that reality to your characters? Try pairing your character’s strong belief in a particular ideal with some small cloud of doubt that slowly eats away at his or her perspective.

For example: Jon was certain that his girlfriend Dianne was just as much in love with him as he was with her. But ever since Vincent mentioned in passing to him that he’d seen her talking with someone on her balcony late at night, Jon couldn’t help but feel a modicum of insecurity every time he kissed her.

4. Use a character’s physical appearance as an expression of inner feelings.

There is a superb literary device known as pathetic fallacy, which uses the outside world to express the inner, and sometimes hidden, emotions of key characters. Try applying this to your character’s physical appearance. Say your main character is struggling with severe depression; he or she may be showing signs of weight loss, disheveled hair, or fatigue. Or maybe your MC is intensely excited; express this by giving his or her cheeks a rosy glow or an impeccable wardrobe to suit his or her pleasant mood. Using physical characteristics to reflect inner emotions will allow you to remind the reader of certain important aspects of a character’s mental state in a more subtle manner, so you don’t overuse internal dialogue or omniscient narration.

5. Draw from your own experiences.

To make a character three-dimensional is to make him or her more believable. What better way to place your character firmly in reality than by using your own life experiences to influence your character’s? Sprinkle your creative narrative with elements of reality so that you allow yourself some distance between your real life and your writing. Maintaining a buffer will allow your work to be accessible to a much wider audience. If your character’s parakeet dies, you can channel your memories of your hamster’s death. The details of the pet species are not important; the human experience of losing a beloved pet can still be transferred to your writing.

Remember: Whether writing fiction or nonfiction, you are writing creatively. By following these five simple guidelines, your characters will develop into more dynamic, three-dimensional entities who will not only add believability to your work, but wider appeal as well.

QUESTION: Which of these strategies do you use the most, and how has your writing improved as a result?

← What Is Considered Previously Published Writing? Lit Mag Spotlight: Columbia: A Journal of Literature and Art →