The Illusion of Meaning: Clichéd Scenarios 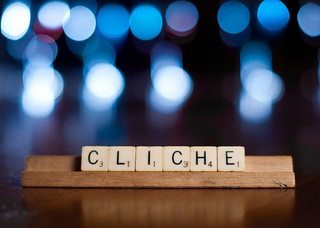 We’re pleased to offer this article from author and editor Harrison Demchick. In this guest post, he shares a fresh perspective on clichés and how to avoid them in your writing—on more than just the phrase-level.

Most writers know to avoid clichés. Clichés, after all, are the antithesis of original writing. Everyone is familiar with phrases such as “a vice-like grip,” “a face as white as a ghost,” or “home is where the heart is.” These preassembled maxims are an easy way to move your story along—but you’re not saying anything new.

While we all know to watch for these overused phrases, not all clichés are sentences or expressions. Some are a bit trickier to catch.

Imagine a superhero surveying a scene of terrible destruction, trying to work up the courage to venture in and save the day. The writer wants a particular emotional reaction at this pivotal moment—something powerful to drive the hero onward. The easy answer is to introduce the character of a little girl who approaches the hero at this moment. She pulls on his hand and asks if he’s going to save everyone. The hero, inspired, says he will, and the story’s action moves forward.

As a culture, we have been trained by books, television, and film to find this image powerful and meaningful. A little girl is innocent and hopeful in the way adults are not, but once were. The strength of a child inspires the hero. What could hit the heart of a reader more beautifully than that?

But the moment is an illusion, and the scenario is a cliché.

Yes, the girl inspires our hero—but for what reason? Does he have, or did he lose, a daughter? Does the girl remind him of someone he once failed to save? If nothing of the sort has already been established, this character has no particular meaning to our hero or our story—only a generalized meaning to all people.

And what of the girl herself? This may not be her story, but there should be something behind her actions that makes sense—and if there isn’t, what we have is a clichéd scenario.

The innocent little girl is an easy image, a writing shortcut. But when the significance of the moment comes from the cultural recognition of a common scenario, we lose the true motivation behind what is actually happening in the story.

Nothing should happen in your story without a reason. An emotional moment should be built, gradually, through all the pages leading up to it. It should originate from specific moments and the individual experience of your character. The scene you set should give the plot depth. It should be unique to the story you’re telling.

It’s important to avoid the easy lure of the clichéd scenario. Whether it’s the hope of a little girl, or a kitten in danger, or the slow clap that crescendos to raucous applause at just the right time, it means nothing if it isn’t original and true to the story you’ve crafted. It’s just the illusion of meaning.

Instead, make sure that your writing always answers the “why” of any plot point. In fact, you can shake things up by taking a stereotypical scenario and turning it on its head. Maybe, in your story, the little girl saves the day.

Harrison Demchick is a freelance developmental editor and author. His debut novel, The Listeners, is now available from Bancroft Press.