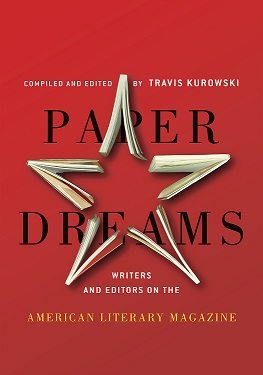 This month’s Industry Influencer spotlight is shining on Travis Kurowski, editor of Paper Dreams: Writers and Editors on the American Literary Magazine, founding editor of Luna Park, soliciting editor for Opium Magazine, Literary MagNet columnist for Poets & Writers, and professor of creative writing and publishing at York College of Pennsylvania.

In case you haven’t heard about this important resource for writers, Publisher’s Weekly said Paper Dreams is a “history and a how-to that illuminates the influence, delights, problems, and engaging idiosyncrasies of these important magazines in American literary culture.” If you’re a reader or a writer submitting to literary magazines and journals, check this out!

Travis, first off, tell us why writers should pick up Paper Dreams. What kinds of things are discussed? And are there any nuggets of wisdom specifically for writers submitting for publication?

When I was in graduate school at the Center for Writers, I noticed that we were all sending our stories and poems to these literary magazines but none of us seemed to know who was working behind the scenes—who made these things and why, what purpose these magazines were serving, where they came from, and what they represented to the culture at large. In other words: We were using them for publication credit, career advancement, the joy of seeing our work in print, etc. We read them, sure, but not much. We didn’t know enough to understand the world we wanted so badly to be a part of.

Writers wanting to write for these magazines—and writers whose friends and teachers are published/ing in these magazines—should want to understand the rich history and contemporary culture of these magazines, and so become more conscious writers and submitters for this market, to know more about the world they are writing and reading in.

And, I think they should want more control. Knowledge is power. And part of being a writer stepping into the publishing world is a small or great feeling of powerlessness. The essays and interviews in Paper Dreams cover the wide range of issues surrounding literary magazines, and so offers the information to make critical choices about these magazines and to show what kinds of kick-ass things they do, past, present, and future.

As for nuggets of wisdom: Katie Chase simply and clearly goes point by point explaining the basics of submitting to literary magazines, and Aaron Gilbreath writes about the day-to-day life of a writer reading and writing for these magazines in his expansive essay “Publishing What We Are Trying to Write.” Aaron’s essay is actually included in perhaps my favorite part of the book, a big “Writers on Lit Mags” section of accomplished writers like Ben Percy, Rick Moody, Lucy Ives, and Laura van den Berg explaining their relationships with literary magazines—from when they were just beginning to get published to their roles today as writers, editors, readers, and advocates.

Okay—you’ll be preaching to the choir on this one. But why do you believe lit mags still matter in 2013?

As a reader, they matter for me in the same way an art gallery or theater or arthouse cinema exists (or online variations thereof)—they show me what’s new, what’s out there in writing and art. What’s exciting. What people are doing. What walls are being torn down. And as a writer, I’m conscious of the fact that this is how people read these mags, and that includes agents and editors.

Literary magazines continue to be important for their dedication to getting great writing to readers and discovering new talent. These magazines serve as the supporting structure and building blocks for the majority of the literary world, and they have done so for more than a century. Here’s Caleb Crain on the importance of literary magazines in a recent interview at The Daily Beast (Crain’s debut novel Necessary Errors is just out from Penguin):

“I might have given up if the journal n+1 hadn’t published a novella of mine, Sweet Grafton, in 2008—a vote of confidence that helped me try one more time.”

And here’s Crain on the singular importance he feels about n+1 as a community and a conversation (which is how I similarly describe literary magazines in the preface of Paper Dreams):

“A magazine is only the outward and visible sign of a community of readers and writers, and I think that from its start in 2004, n+1 has understood itself as a community, which is not the same thing as a brand. Every community has an ad hoc and editable set of norms, and n+1 has a set that fosters great criticism: an insistence on taking the world of ideas seriously, even if that looks nerdy to outsiders; a catholicity of subject matter; a permission for, and even an encouragement of, disagreement.”

You are the founding editor of Luna Park, soliciting editor for Opium Magazine, and Literary MagNet columnist for Poets & Writers. So many times, we hear writers say, “You have to be published to get published.” What would you say to a writer who’s feeling like he/she will never find a way into the world of lit mags?

There is no needing to be published to get published (or needing to be someone’s niece or what have you), but there is a certain amount of rejection that every creator/artist must learn to deal with throughout their lives. Novelist Stacey Richter writes honestly and hilariously about this in her essay in the book, “The Chair of Rejection,” about how she—and later a community—learns to deal pragmatically with rejection.

My first “real” publication was of an essay I wrote for a nonfiction writing class in graduate school. I had no idea what would come of that assignment, but when Steve Davenport called me from Ninth Letter and told me they wanted to pay me to print it, I nearly drove my pickup off the road. When I later discovered they were having someone hand-paint the entire essay on large canvases and then photo-reproduce it all for print—well, I still can’t believe that happened. Just the most amazing experience I’ve ever had as a writer. I was blown away that an editorial and production team would spend that much time and attention on any words, let alone mine.

Things got a bit easier after that; I suppose I got less worried as a writer. But I’ve still got a file folder of rejections I continually add to now eight years later.

Honestly, though, I think the best way to deal with the anxiety of the acceptance/rejection game is to learn to care about what it is you want to be a part of. Want literary magazine editors to publish you and literary magazine readers to read you? Then care about the magazines themselves, not just as a means to an end. If you don’t, then why write for them? Why waste your time and theirs? Become a part of the community of humans engaged in literature/arts/publishing and focus on the writing. My absolute favorite piece on this topic is from Blake Butler on his blog, a post that is perhaps oddly titled about being a part of the world rather than just wanting something from the world. Butler also has a similarly interested post over at HTMLGIANT: “22 Things I Learned from Submitting Writing,” my favorite being #19: “Be a person, not an email address with a social profile and an onslaught.”

Since 1994, we at Writer’s Relief have seen the world of lit mags change dramatically…multiple times. Any predictions about the future of literary journals?

Increased growth? A general estimate is that the number of U.S. lit mags has tripled just in the last thirty years. And though it feels things are flattening out a bit (maybe because of the recent recession), there are still more and more lit mags coming on the scene all the time, thanks to easier access to production materials online and off and more and more creative writing classes, programs, and workshops springing up across the country.

One thing for sure is that the Internet is changing how we read and how we publish, and innovative magazines like Triple Canopy are on the cutting edge of these changes. And, in an almost inverse reaction to that, a new interest in the shape/design/style of the print magazine has taken place, with innovative new work at places like McSweeney’s and Tuesday: An Art Project changing the way we think about the magazine object. If publishers and editors are going to choose print over digital these days, it seems that many want to have a real reason for doing it, and so we are seeing a wave of eccentric and elegant and odd new magazines.

But this might be just the age-old story of writing and technology interacting, such as during the mimeo revolution of the 1960s and ’70s, which poet and publisher Kyle Schlesinger writes about in Paper Dreams in his essay “The Letterpress and the Mimeo Revolution.”

Paper Dreams’ publisher Atticus Books has just been fantastic to work with from start to finish. Atticus founding publisher Dan Cafaro has been 110% behind the book from the start, as he knows how much literary magazines mean to him and to the writers he loves and publishes.

Let me leave you with someone else’s voice. The following is poet and West Branch editor G.C. Waldrep’s contribution to Paper Dreams, two paragraphs that elegantly distill the literary magazine enterprise past and future into a handful of sentences—and the most precise, to the point, bit of writing about these magazines I have ever come across:

“Literary magazines and journals have always represented, to me, the best sort of extracurricular conversation: among writers, yes, but more importantly, among works. There’s an imbrication, an electricity of contact, that happens when this poem is placed next to that story (or poem or essay, etc.). This human conversation is, over time, what we call literature. The value of literary magazines and journals is that each issue constitutes a quick snapshot of that conversation, that particular moment in time, who’s standing next to whom, what energies are flowing back and forth among the products of our varied talents and imaginations. In art as in life, some conversations are more interesting—and more enduring—than others.

“When I first started out as a writer, I had doubts—ethical, aesthetic, procedural—about publishing. What made me overcome those doubts was wanting my poems to be part of this larger conversation. As an editor, I aspire to curate that same sort of human conversation, [to] create those same shocks of delight and terror a creative juxtaposition of works can produce.”

Thanks so much for being with us today, Travis! Good luck with the book release!

← Writer: When Copying Is Good For Your Career Writer's Relief Links Roundup, August 2013 →