Industry Influencer: We Do Write 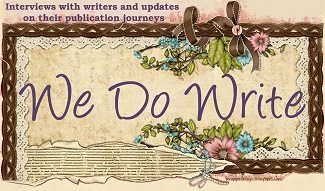 This month’s Industry Influencer spotlight is shining on We Do Write. We Do Write is a great blog for writers who are on the brink of publishing a first young adult (YA) or middle grade (MG) book. Blog editors Dorothy Dreyer and Elizabeth Holloway regularly interview new writers who are poised to become “the next big thing” but are still willing to take time out of their day to talk about how they did it.

It’s a great resource not only for writers who want to learn more about publishing in YA and MG markets; it’s also great for readers who are on the hunt for fantastic new reads!

Tell us about how you came up with the idea for We Do Write.

Elizabeth: Well, I’m a fairly new addition to We Do Write. Since I can’t take credit for the idea of the blog, I will defer this answer to the founder, Dorothy Dreyer.

Dorothy: A few years ago, I started following tons of writers on Twitter—both published and yet-to-be—and also took part in pitch contests and secret agent contests. I noticed how many awesome stories were out there and thought, wow, if I were to feature every writer I came across, I bet I’d have enough blog material to last forever. And then some. Plus, I’m a big believer in paying it forward. I’m so happy to say that a few of the aspiring writers I interviewed way back then are now published authors with books out there.

What’s the best advice you’ve heard (or given) to writers who want to break into YA or MG books?

Dorothy: Read! Read books in those genres and get to know your target audience. Find out what’s out there, what people love, but more importantly, what you as a reader love. I really think you’ve got to be able to write something that you yourself would enjoy reading. It’s that passion that’s going to motivate you to reach your goal.

Elizabeth: As Dorothy said, READ. Learn from the professionals. It is the single best way to develop a sense of pacing, plot, characterization…all of it. But, aside from that, I’d say write. What I mean by that is practice the craft of writing. It is an art. No great artist put out a masterpiece with their first tentative piece of work. It takes persistence, hard work, humility, and the skin of an armored elephant.

How important is having a Web presence for today’s professional writers?

Dorothy: The thing is, if you want to get your book into the hands of readers, you have to get the word out there. Some writers are lucky and have big companies to back them with advertisements and marketing campaigns, and that’s great! For the rest of us, the best way for people to hear about our stories is word-of-mouth. Blog posts, blog tours, tweets, Facebook fan pages, even Tumblr and whatever the next trend will be. Readers are more likely to pick up your book if they’ve heard of you or if someone they know (as in, a reliable book blogger) mentions your book. People are more likely to connect with a writer if they have some sort of feel for them on a personal level, as well. So if you’ve established a Web presence, you’ve got the base to build your audience.

Elizabeth: Web presence is a MUST in today’s market. You have to get your name out there to build your audience. It’s a hard truth to swallow, especially for those shy souls (*cough* me *cough*) who just want to write by candlelight in a cave, but it is a necessity. With so many books flooding the market, it’s important to stand out in the crowd. And, as Dorothy said, what’s the best way to stand out in a crowd of faces? Be someone a reader recognizes.

You are both authors with your own books out too! Tell us how you made that happen.

Dorothy: Lots of hard work. MY SISTER’S REAPER is not the first book I’ve written. The first three I wrote just didn’t make the cut in the eyes of agents and editors, so I kept on working to achieve my goal. You’ve got to have a tough skin in this business, learn to dust yourself off from rejection, and persevere. For MY SISTER’S REAPER, I entered a pitch contest on YALitChat. It was an agent-judged contest, and I came in under the top ten. When the top three winners were announced, my name wasn’t on the list, so on I went to enter another contest and send out a few query letters. As luck would have it, Georgia McBride, who owns YALitChat and Month9Books, had her assistant contact me to let me know they liked my pitch and asked if they could read my story. The next thing I knew, they offered me a two-book publishing contract. It was amazing! MY SISTER’S REAPER is available now, and the sequel comes out in the spring of 2014.

Elizabeth: I’d love to say it came easy, but that would be a gigantic lie. It was hard.

I wrote my first novel when I was eighteen. It was awful. (Don’t tell eighteen-year-old Elizabeth that. She thought it was AWESOME!) Then life got in the way and it took me twelve years to give writing another try. That second book was tons better, but still not quite there. But in the edit, send to betas, revise, repeat process, I learned a lot about writing and the publishing industry. I used all of that hard-earned knowledge and wrote CALL ME GRIM.

I was lucky enough to snag my wonderful agent, Lindsay Ribar, in my second round of queries. She sent my novel to Month9Books, where some wonderfully fabulous person (I wish I knew who it was, so I could send them chocolate kisses) read it and liked it enough to send it along to Georgia McBride, owner of Month9Books. Much to my delight, they bought CALL ME GRIM and the second book in the series. CALL ME GRIM is scheduled to release Fall 2014 from Month9Books.

About Dorothy and Elizabeth

Dorothy Dreyer: I’m a Philippine-born American living in Germany with my husband and two teens. I write young adult books that usually have some element of magic or the supernatural in them. Find Dorothy on Twitter, Facebook, and Google+!

Elizabeth Holloway: I am an author and a maternity nurse living in Southern Pennsylvania with my two teen children and our pets. In addition to nursing and writing, I also read avidly. My first novel, CALL ME GRIM, will be published by Month9Books in Fall 2014. I’m represented by Lindsay Riber of Sanford J. Greenburger Associates. Find Elizabeth on Twitter!

← The MFA Conundrum: Does An MFA Hurt Or Help A Writer’s Career? How To Come Up With A Great Title For Your Book (Or Story Or Poem) | Writer's Relief →