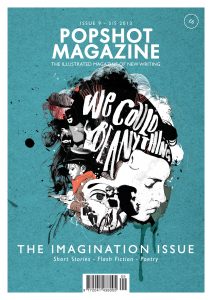 This month’s Lit Mag Spotlight is happy to be shining on a not-so-close-to-home lit mag, Popshot! Popshot Magazine, based in the UK, publishes illustrations along with poetry, short stories, and flash fiction. Read a little about their ideal submission, what turns them off, and how they’re revolutionizing the lit mag industry. Enjoy!

CONTEST: Leave a comment on this blog post by June 20 to enter to win a FREE copy of Popshot’s latest issue, The Imagination Issue. This contest is now closed. Congratulations to our winner, Shannon! Thank you to all who participated.

Give us the lowdown on your journal’s mission:

The mission has slightly evolved over the years. Popshot started life as a straight-up poetry & illustration magazine and was a bit of a revolt against other poetry magazines. After an afternoon perusing the shelves of the literary section in Borders back in 2008, it dawned upon me as to how poetry had managed to keep itself viewed as musty, elitist, and out of touch. Poetry is a beautiful and fascinating art form, but the pages of magazines didn’t make it look that way. Magazines can act as the face and the figureheads of an industry or art form, and I thought poetry’s face should be a little more enticing. In my 21-year-old naivety, I decided I could do it better, and that’s when Popshot was born. The first issue launched with a quote from Adrian Mitchell “Most people ignore most poetry because most poetry ignores most people” that summed up what we were trying to do. In October of last year, the magazine stopped declaring war on poetry’s reputation and relaunched as “The Illustrated Magazine of New Writing”—growing to include short stories and flash fiction as well as poetry, all fully illustrated.

Describe your ideal submission in 15 words or less:

Something that’s thought-provoking, reads effortlessly, and has a surreal/paradoxical/unexpected twist to it. That’s as close as I can get in 15 words!

Tell us about a piece you recently published that got the staff really excited.

At the risk of sounding self-congratulatory, most of the poetry and short fiction that we published in our Imagination Issue got us really excited. If I had to pick one, I’d probably go for a flash-fiction piece called “The Light Eater” by writer Kirsty Logan. It tells the story of a daughter who starts eating lightbulbs following the death of her father. I won’t give any more away as you can read it for yourself by downloading our sample PDF of the issue. What I loved about it was its literal take on trying to find lightness within the dark that’s often left when we lose someone we love, and the bizarre lengths that we can go to in order to try to get them back despite its complete futility. The piece managed to take all of that emotion and condense it into a story of less than 350 words that is both surreal and moving at the same time. My eyes still sting when I read the last line!

Regarding submissions: What’s the most common turnoff that you encounter?

Naturally, there are exceptions to the rule, but poems about how wonderful it feels to write poems usually turn me off completely. Also, experimenting with form just for the sake of it is a big no-no. I’ve read so many submissions that would be far better if they just read seamlessly from one line to the next, rather than cutting up some beautiful prose because it looks more interesting. If a poem is a good beautiful poem, you don’t need to explode all the lines across the page to make it into something. We rarely remember a poem for what it looks like, more for what it says to us.

What’s the most common oversight (in terms of submission guidelines)?

Forgetting to pay attention to the submission guidelines! Whether people like them or not, submissions guidelines are there for a reason, and trying to revolt against them is never a good idea. For example, Popshot requests that submitters send no more than 3 pieces. We do it because we don’t have the time to read more than that from one person. So if someone sends 12, that can get our backs up!

Why is your journal awesome?

Good question, and one that might obliterate my modesty. Because it’s one of the only literary magazines in the world that is fully illustrated, using some of the best contemporary illustrators working today. Because it also publishes what we believe to be some sublime short fiction and poetry that can stimulate the hairs on the back of your neck. Because it’s a beautiful thing to hold, and because it provides a platform for some of the most exciting writing today. It also helps that our subscriptions start at £10.

Where can readers find your submission guidelines?

Should everyone that reads this take out a subscription to Popshot Magazine?

Contest: Leave a comment on this blog post by June 20 to enter to win a copy of Popshot’s latest issue.