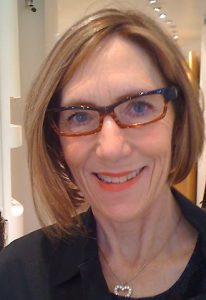 This week, the spotlight is on Pam Davis and her poem, “Make-Up,” published first in Prairie Schooner.

Q: What inspired you to write “Make-Up”?

My mother lost her sight to glaucoma over a period of several years. By then her Alzheimer’s disease had also progressed to the point that she needed a higher level of care than we could provide for her. After she was moved to the Alzheimer’s home, I was boxing up her things for storage. Her vanity drawer still held the beauty products she had used all her life. As I gazed down into it, I had a sudden jolt remembering the last time I had applied her makeup for her. It was her 80th birthday, and my brothers and I had arranged a party of her friends at a restaurant where she used to go dancing when our dad was alive. I was accustomed to helping my mother bathe and dress, but the way she allowed me to touch her face with my fingertips seemed almost too intimate, too trusting.

Pam and her mother, Pauline

I did not write the poem until after my mother died four years later, in 2004. Then I put it away for several years and picked it up again last year. I don’t think the poem would have worked if I had tried to write it any earlier. When I started to work on it again, I had the same strong sense memory I had when I was packing up her cosmetics: the smell of her powder, the caked eye shadow, worn-down lipsticks, and strands of her hair stuck to the bottom of the drawer, as well as the oval hand-mirror she had held to her face when I was a little girl watching her get ready to go out.

Blind now, my mother closes her eyes, tilts her chin. I begin to
stroke foundation across her brow as if bestowing a benediction.
The last time I touched her face, my fingers were small, her glamour
vast. I smooth and blend liquid beige into fissures that bracket her
nose, eyes, and mouth. Her makeup drawer releases powdery clouds
that shimmer up, sift back down. Strands of dark brown hair are
lacquered to the bottom of the drawer. Her arsenal of jars, pots,
and plastic tubes are used up, the colors outmoded. A dried-out
crater of rouge gives up a dab for both cheeks, her skin buckling
under my fingertips. Here is her lipstick—Cherries in the Snow—
worn flat to the rim. I swab enough to redden her mouth. She rolls
her lips together spreading the color. I say we are done and hold a
mirror in front of her face. She turns her head this way and that,
pretending to see herself beautiful.

← In Your Words: How To Stay Motivated To Keep Writing Lit Mag Spotlight: AEROGRAM and Fortunates →