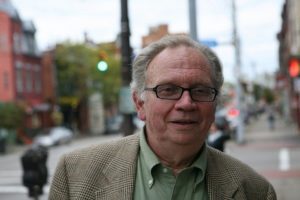 This week, the spotlight is on Jay Carson and his poem, “The Garden of Lost Girlfriends,” published first in Sanskrit.

Q: What inspired you to write “The Garden of Lost Girlfriends”?

The inspiration for the poem was an actual garden poetry tour of several gardens on the Northside of Pittsburgh. Each garden had a poet who read for each group that came through. While I was there with the woman I was seeing, an old girlfriend came and joined our group. And I did actually offer to change places with the old girlfriend so she would not have to sit near the flowers that were attracting a lot of bees. And the title did come from the newer girlfriend, who knew exactly what was going on. (Which is why the title is in italics for dialogue.) I didn’t have an ending for the poem for some time. Then I read an article about the disappearance of the honeybee—which was a big deal in the news for a short time—I don’t know how it was resolved. Then I saw a TV special on the problem where I learned about slot combs. Shortly after, the last three lines with the comparison of women to hardworking bees and men/me to dependent freeloaders came to me.

Although the parts came rather fast, maybe within two days each: for the beginning half, and about the same for the middle, and maybe two days for the end. But there was a big break, perhaps three months, in between the writing of the first half and the writing of the second. About two days between the middle and the end. I’m guessing I was working subconsciously on the last parts. I often work that way: start, wait, and then end.

Alas, both women have joined the Garden of Lost Girlfriends.

“The Garden of Lost Girlfriends”

my ex called it as another old lover
breezed out the gate. She made it sound
not my fault as if they were
just misplaced, like house keys.

We were at a poetry progressive
garden party: poem, appreciate garden,
poem, flowers, you know,
as long as human concentration
or, I feared, nature could hold out.

The evening shade was closing in
when that other old love stormed through
the gate. I thought I could save her
earlier when the bees came after her
and I offered to change seats with her
and what? Pretend I wasn’t afraid?
Take the stings myself?

My commentator, garden-namer
said I should learn from all this.
I looked chastened,
but she was having none of it
like the keepers tell us of
those bees that won’t
come back to the hives,
won’t appreciate their slot combs
to work and give honey.

Inexplicably, they’d
rather just fly homeless
until they die. And we, of hunger?

You can also read Jay’s poem in Sanskrit, Volume 41.

← How To Write A Query Letter For A Self-Published Book #WritersReliefSwag Contest On Twitter! →