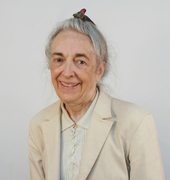 This week, the spotlight is on Eileen Hennessy and her poem, “First Manned Flight,” published first in Fulcrum.

Q: What inspired you to write “First Manned Flight”?

One of my favorite characters in Greek mythology is Icarus, the son who was outfitted by his father with a pair of wax wings, and who flew too close to the sun, with the predictable result: He plunged into the sea. I particularly like Brueghel’s painting of the subject, in which the falling Icarus is nothing more than a figure in the distant background, while the everyday activities of the ordinary local people are foregrounded.

One Sunday I read a short piece in The New York Times about a group of European tourists on a visit to New York City. They were in a very tall office tower—I’ve forgotten which one—from which they were able to look down on shorter but still very tall office buildings and look into the offices and watch the people at work. Their comments, quoted in the piece, indicated how fascinated they were by this experience. This ultimately led to the creation of stanzas 2 and 3.

I had been looking at a reproduction of Brueghel’s painting just a short time previously, and on some level my mind evidently made a connection. It also made a connection with one of Milan Kundera’s books, The Unbearable Lightness of Being. From there it apparently moved to the lightness of Icarus plunging to his death (stanza 4). I have an interest in angels in art, so any flying figure in a painting is likely to bring angels to my mind (“angel poised,” stanza 4). In Brueghel’s painting, the sun is setting (stanza 5).

As for stanzas 1 and 5: On September 11, 2001, I had a 9:00 a.m. appointment two blocks north of the World Trade Center. By the time I left the area around 10:30, I had seen and heard things that I still haven’t forgotten, reckon I never will. I wasn’t aware that these memories were hovering around the edges of my mind as I was writing this poem. Only after several people commented that it was a poem “about 9/11″ did I realize that, in fact, those memories were probably lurking in the background.

It took me perhaps two or three weeks (working at it from time to time) to bring the poem to what I considered a finished state. This is pretty fast for me, which I guess says a lot about how effectively I had made contact with some key memories.

Fingertips wingspanned,
I recited my instructions.

Looked down at a tower,
wondered, Are those really
people in there?

Identified oncoming object:
angel poised
to celebrate the lightness
of things that fall.

Perfect time to fly
into the sunset.
Just to the edge.
Then one inch more.

To read more of Eileen’s poetry, you can purchase her book, This Country of Gale-force Winds, published by NYQ Books, here.