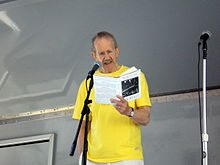 We have a new poet laureate: Philip Levine. Levine began to write poetry as a young man in college, when he was working in the Detroit auto industry. He is known for his depictions of working-class and blue-collar America. His inspiration involves giving a voice to voiceless people.

Here’s a little taste of his bio, from The Poetry Foundation:

“The son of Russian-Jewish immigrants, Levine was born and raised in industrial Detroit. As a young boy in the midst of the Great Depression of the 1930s, he was fascinated by the events of the Spanish Civil War. His heroes were not only those individuals who struggled against fascism but also ordinary folks who worked at hopeless jobs simply to stave off poverty. Noted for his interest in the grim reality of blue-collar work and workers, Levine resolved “to find a voice for the voiceless” while working in the auto plants of Detroit during the 1950s. “

And here’s what Philip Levine’s reaction was to being the new poet laureate (according to The Detroit News):

“The single greatest reward was the writing of the stuff itself, the poetry,” he said. “And the second biggest one had to do with my students, mainly here at Fresno State. I had some amazing students here who went on to wonderful careers as poets. Many became very good friends of mine.”

As for the national attention that will no doubt be focused on him, Levine acknowledges that it’s nice to be recognized, but he insists that no one should get too excited about awards and honors. In the overall picture, they mean very little.

“Something like the Pulitzer is quite wonderful for a couple of weeks, and then you go back to work,” he said.

Read some recent examples of his poetry right here.

And REMEMBER: Our Review Board is reading for strong poems, stories, essays, and book projects right now! If you want help making submissions to literary agents and editors, submit before our deadline of August 12. Maybe you’re a future poet laureate like Philip Levine!

QUESTION: What drives you to write poetry?

← To Print Pub or E-Pub? Tis NOT The Question! Is A Good Literary Agent Good Enough? When To Settle For Your Second Choice →